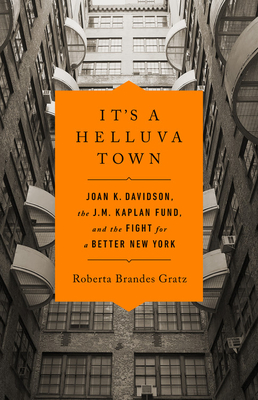 It's a Helluva Town

Joan K. Davidson, the J.M. Kaplan Fund, and the Fight for a Better New York

Learn about key moments in New York City's development, starting with the history of the J.M. Kaplan Fund and its role in shaping the city from World War II to the present.

The J.M. Kaplan Fund was established in 1945 by Jacob M. Kaplan, and would go on to play a critical role in New York City's cultural and urban life. Kaplan's long leadership of the Fund (1945-1977) was marked by determined advocacy, including the effort to save Carnegie Hall from destruction, support for institutions like The New School for Social Research and the South Street Seaport Museum, as well as to bolster the cause of union democracy, the arts, and the co-operative movement. Since the 1970s, the Fund has been led by Kaplan's daughter, Joan K. Davidson, who has led the Fund to its current place as a forceful presence in New York City's civic life, supporting the Westbeth Artists Housing, Greenmarkets, and more.

Roberta Brandes Gratz is an award-winning journalist, urban critic, lecturer, and author who has published four previous books, including most recently We're Still Here Ya Bastards: How the People of New Orleans Rebuilt Their City andThe Battle for Gotham: New York in the Shadow of Robert Moses and Jane Jacobs. Her writing has also appeared in the Nation, the New York Times Magazine, and the Wall Street Journal. She led the Eldridge Street Project for more than 20 years, the effort to restore the 1887 synagogue on the Lower East Side and establish the Eldridge Street Museum. She previously served on New York City's Landmark Preservation Commission and NYC's Sustainability Advisory Board. With Jane Jacobs, she founded The Center for the Living City. She lives in New York City.
Loading...
or
Not Currently Available for Direct Purchase