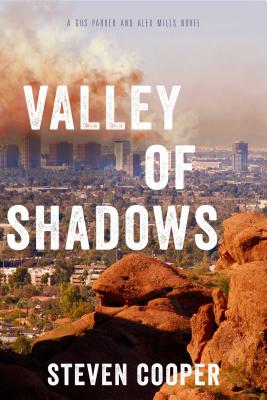 A cop. A psychic. And a dead socialite. Who killed Viveca Canning and where is the Dali masterpiece that hung on the walls of her estate? So many people had a motive. Phoenix Detective Alex Mills is on the case with the help of his sometimes-psychic buddy Gus Parker. You won’t find another duo like them. And once you hop on the wild ride, you won’t want to get off. Who will survive a doomed flight over the Pacific? Who tried to blow up an art gallery? Who saw Viveca Canning as a threat and shot her twice in the head? Those questions hound Gus and Alex as the case unravels. It’s an art caper wrapped in a murder mystery. The Valley of the Sun becomes a Valley of Shadows, where everyone has something to hide and the truth lies beneath Phoenix in a labyrinth of tunnels and dungeons.

There’s a lot at stake for Gus and Alex. With the case swirling all around them, the future of Gus and his rock n’ roll girlfriend hangs in the balance. For Alex, it’s a test of family loyalties as a health scare for his wife brings him to the breaking point.

Cooper’s style is, at once, scorching and wry. He deftly and seamlessly mixes thrills and chills with snark and wit. There’s good and evil, love and despair, compassion, deceit, and danger. The action swerves around twists and turns and collides with a cast of characters you will not soon forget.

Praise For Valley of Shadows…

This novel comes out of nowhere to knock you sideways. Steven Cooper provides readers with a fresh blending of heist novel and traditional mystery. Lovers of art and high society will be fascinated, but it is the complex characters that will linger with readers after the exciting conclusion. This is a crime-solving duo that shouldn’t work, but Cooper’s ability to imbue them with humanity and compassion will have readers rooting for them for years to come.
— BOLO Books

A really good crime novel is dependent on two major components, vivid characters and intriguing plot, and there’s no doubt that Steven Cooper's Valley of Shadows has both, in spades. I have to say, though, that Mr. Cooper also has given his readers a setting that has to be considered the third and, perhaps most unforgettable, element.
— Buried Under Books

Steven Cooper is a freelance writer, video producer, and the author of four previous novels. A former television reporter, he has received multiple Emmy awards and nominations, a National Edward R. Murrow Award, and Associated Press awards. He taught writing at Rollins College (Winter Park, FL) from 2007 to 2012.
Loading...
or support indie stores by buying on