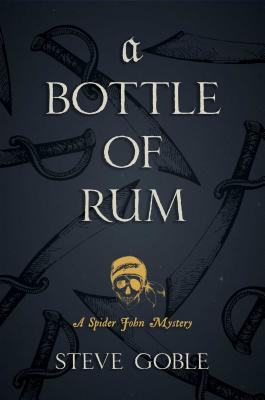 A Bottle of Rum (A Spider John Mystery #3)

August, 1723 -- Spider John Rush believes he has escaped piracy forever. Enjoying rum and chess in a dark Lymington tavern, he dreams of finding passage to Nantucket to reunite with his beloved Em and to finally get to know the son he remembers only as a babe in arms, though the lad must be dreaming of going to sea himself by now. But when a lazy taverner is stabbed to death, one glance at the victim tells Spider the pirate life has followed him ashore and he cannot possibly ignore this bloody crime. The wise maneuver would be to run before authorities arrive, but Spider is denied that choice because he’s already deeply, connected to the crime—he fashioned the murder weapon with his own hands.

The knife was a gift to a young man, one who ran off with the notorious Anne Bonny before Spider could drag him into a respectable life.

Soon, Spider John and his ancient shipmate Odin are dodging accusations and battling smugglers on a trail that leads to a madhouse where patients are dying one by one. Spider finds himself tangling with a horribly maimed former shipmate, vengeful pirates, a gun-wielding brunette, a death-obsessed young woman, a sneaky farmhand and a philosopher engaged in frightening experiments. But death seems to be winning at Pryor Pond, and the next life lost may be the one Spider desperately wants to save.

Spider must brave sharp steel, musket balls, gunpowder bombs, dangerous women and gruesome surgery if he is to find his foolish young friend alive and try once again to put piracy in their past.

Praise For A Bottle of Rum (A Spider John Mystery #3)…

The combination of swashbuckling and deductions remains a winning one.
— Publishers Weekly

Steve Goble's third installment in his Spider John mysteries takes his pirate-detective into strange waters, or rather land, when he follows a twisted trail in search of a lost shipmate and friend. Treachery, bloodshed, wenches and dark secrets abound as Spider and his one-eyed companion, Odin, face death and damnation to quench their thirst for justice, and perhaps a swig or two of Rum.
— Bradley Harper, 2019 Edgar Finalist for A KNIFE IN THE FOG

Avast, me hearties, here be an excellent read! Spider John and one-eyed Odin are back with a swashbuckling, page-turning plot and a treasure chest full of the most original characters to ever swagger, steal, and sleuth their way through a mystery. Once again, Steve Goble proves himself a master of piratical prose and mysterious mayhem.
— Susan Spann, bestselling author of the Hiro Hattori mysteries

A Bottle Of Rum entertains from the first knife thrust to the final explosion. Goble’s mystery-solving pirate, Spider John, comes ashore in his latest adventure, but the swashbuckler’s trademark ingenuity, loyalty and mind-boggling profanities are on full and dazzling display as always.
— Andrew Welsh-Huggins, editor, 'Columbus Noir' and author, the Andy Hayes private eye series.

Spider is at heart a funny, wise and caring individual whose personality is depicted in a way that immediately engages the reader.  One wonders why there’s a touch of evil and insanity in former pirates but recognizes that there are some good souls among them worthy of admiring and rooting for.  Taverns are not only sources of satisfying drinks but also unexpected but probable fights... A Bottle of Rum is a fascinating tale that puts a new twist on Spider John and his friends and enemies.  Nicely crafted, Steve Goble!
— Crystal Book Reviews

is the author of The Bloody Black Flag, The Devil's Wind, and A Bottle of Rum of the Spider John mystery novels. A former journalist, Goble now works in communications for a cybersecurity firm. Previously, he wrote a weekly craft-beer column called "Brewologist," which appeared on USA Today Network-Ohio websites.
Loading...
or
Not Currently Available for Direct Purchase