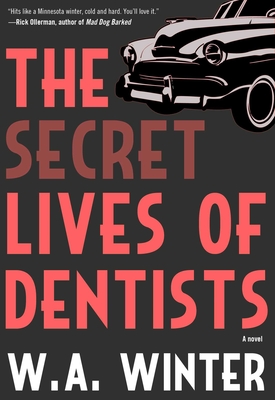 The Secret Lives of Dentists

In 1955, small-town girls flock to Minneapolis for work, love, and adventure. But Teresa Hickman, from Dollar, North Dakota, is a special case. Beguiling. Promiscuous. And, on a chilly April morning, dead along an abandoned trolley track in a Southside neighborhood.

Teresa Hickman was three months pregnant when she was strangled. Was the unborn child’s father also her killer? Could the killer have been––among the many men drawn to her like flies to honey––Dr. H. David Rose, a middle-aged dentist who admits he was with her the night she died? There’s no forensic evidence or credible witnesses tying him to the murder. Yet the police, including a pair of obsessive investigators with lethal secrets of their own, agree that a Jewish dentist will get them a conviction.

Dr. Rose’s spectacular trial and its shocking aftermath will mesmerize the Upper Midwest like few crime sagas before or since.

Praise For The Secret Lives of Dentists…

Winter does a masterly job maintaining suspense about the outcome and Rose's guilt, and deepens the narrative by integrating the city's pervasive anti-Semitism into the plot. This is a superior roman à clef.

The human drama of the crime, the investigation, the trial, and the aftermath are laid out with mesmerizing precision.
— NY Journal of Books

W.A. Winter is the pen name of William Swanson, a Minneapolis journalist. Swanson is the author of three true-crime books––Dial M: The Murder of Carol Thompson, Black White Blue: The Assassination of Patrolman Sackett, and Stolen from the Garden: The Kidnapping of Virginia Piper––published by Borealis Books, an imprint of the Minnesota Historical Society Press. Writing as W.A. Winter, he has published, besides The Secret Lives of Dentists, three suspense novels available online from Kindle Books and Smashwords.com: Handyman, See You / See Me, and Wolfie’s Game.
Loading...
or
Not Currently Available for Direct Purchase