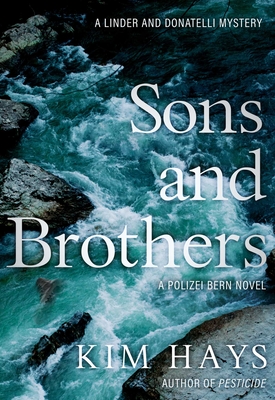 Walking his dog along Bern’s icy Aare river, a surgeon in his seventies drowns. When his bruised corpse is found, his watch is missing. A mugging gone wrong? The more Swiss police detective Giuliana Linder and her assistant Renzo Donatelli learn about Johann Karl Gurtner, the more convinced they are that he was no random victim.

Talking to Gurtner’s family raises as many questions as it answers, but one thing becomes clear: the surgeon’s middle son, Markus, a photographer with a history of violence and substance abuse, has been a disappointment to his father all his life, and he is an increasingly plausible suspect for Gurtner’s murder. Other information leads Giuliana and Renzo back to the village where Gurtner was born, and, spending so much time together, they again have to deal with their attraction to one another and their ambivalence toward having an affair.

Alongside their investigation another story unfolds.  During the year leading up to Gurtner’s death, his son Markus becomes friends with Jakob Amsler, a long-ago classmate of the surgeon’s. In contrast to the privileged young Gurtner, Jakob was a foster child, removed from his family by the authorities at nine and placed on a farm to work in terrible conditions.  From Jakob, Markus learns that his father’s life contains some ugly secrets.

As Giuliana and Renzo discover more about Gurtner’s past, these secrets threaten to surface.  Did Gurtner’s killer want to keep them hidden—or to force them out into the open at any cost?

Kim Hays is a dual Swiss/US citizen. After years spent in the States, as well as in San Juan, Vancouver, and Stockholm, she now lives in Bern with her Swiss husband.  She has worked in a variety of jobs, from forewoman in a truck-engine factory to lecturer in sociology. Sons and Brothers is the second mystery in her Polizei Bern series; the first, Pesticide, was shortlisted for the 2020 Debut Dagger award by the Crime Writers’ Association. Kim has a BA from Harvard and a PhD from the University of California-Berkeley.
Loading...
or support indie stores by buying on