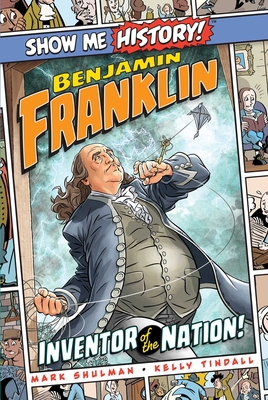 Inventor of the Nation! (Show Me History!)

Benjamin Franklin has been called one of the most accomplished and influential Americans in history, and his role in shaping the United States has had a lasting impact that is still felt today. From his birth in Boston in 1706 to his days as a printer, inventor, and politician, Benjamin Franklin: Inventor of the Nation! tells the story of “the First American” in an accessible graphic novel format. Franklin’s research into topics as varied as electricity, meteorology, demography, and oceanography were as wide-ranging and important as his travels, which took him across the globe as a diplomat for the newly founded United States toward the end of the 18th century.

Praise For Benjamin Franklin: Inventor of the Nation! (Show Me History!)…

Jeff Martin is an award-winning cartoonist and comics educator from Edmonton, Alberta, and is definitely not a robot. His recent works include the Hockeypocalyspe series; the historical comedies Redcoats-ish: Jeff Martin's War of 1812 and Redcoats-ish 2, published by Renegade Arts Entertainment; Where Is Zog? webcomicseries published by Heavy Metal; and his newest project, the webcomic series Hell, Inc. Jeff won Best Graphic Novelist in the Best of Edmonton awards by Vue Weekly magazine and has been nominated twice for the Gene Day Self-Publisher Award in Canada.

Shane Corn is a veteran of the animation industry, having worked at Nickelodeon, Fox Animation Studios, FXX, Warner Bros. Animation, and Cartoon Network Studios. He currently runs a gallery and studio for individuals with developmental disabilities in Canton, Ohio, and is coloring Show Me History! graphic novels.

Christopher Peterson has been drawing and occasionally writing comics for the past 16 years. He has self-published anthologies, one-shots, and limited series—one of which garnered a Joe Shuster Award nomination. Recent works have included the Grindhouse series from Dark Horse Comics, Mayday series from Black Mask, the Broken World series from Boom! Studios, and various others from Image Comics and Stela Comics.
Loading...
or support indie stores by buying on
(This book is on backorder)