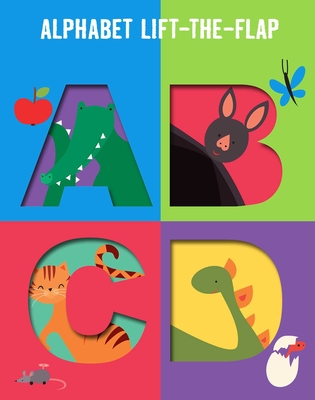 Children can peek under the flaps and learn the alphabet in this unique board book full of adorable animals!


Learning the alphabet is so much fun with this unique board book where adorably illustrated animals turn into letters under each lift-the-flap! See what looks like a smiling alligator, and then open the flap to reveal a green letter A, studded with sharp triangle teeth! Children and adults will marvel at the clever and engaging flaps that turn adorable animals into uniquely illustrated letters of the alphabet.

Alice De Page is an illustrator based in Belgium. In 2005, she obtained her illustration diploma at Saint-Luc in Brussels. Alice started her career working as a graphic designer and bookseller, throughout this time she continued to draw. Her first book was released in 2009 by a small French publishing house, and she illustrated her first collection of postcards with Editions des Correspondances. In 2011, she became a full time illustrator, and has since worked with clients such as, Hachette, Magnard, and Grund.

Autumn B. Heath was born and raised in the Golden State, receiving her B.A. in English from the University of California, Irvine, and her M.F.A. in writing from California College of the Arts in San Francisco. She has an overactive imagination, which is instrumental in reading and writing about worlds beyond her own. She also enjoys spending time with her cats and tortoise among the native plants and flowers in her San Diego yard.
Loading...
or
Not Currently Available for Direct Purchase