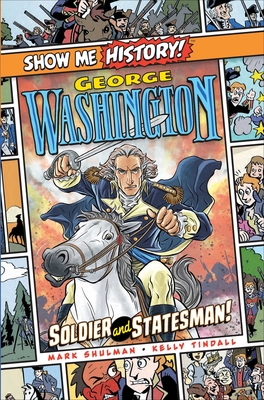 Soldier and Statesman! (Show Me History!)

Show Me History will show you the real man behind the myths!

Known as the “Father of Our Country,” George Washington lost his own father at the age of 11, was a surrogate father to Alexander Hamilton, and yet was never a father himself. In war and in peace, he left an unmistakable impression on his new nation in more ways than you know. George Washington: Soldier and Statesman! tells the story of the United States’ first president—from his rise as a soldier fighting for American freedom from Great Britain to his legacy as an impartial statesman who put his country before himself. Readers of all ages will be entertained and educated by the full-color illustrations and historically accurate narrative of this graphical biography.

Praise For George Washington: Soldier and Statesman! (Show Me History!)…

Kelly Tindall, the award-winning writer/artist of The Adventurers: Love You Very So Much and the Strangebeard series, makes one heck of a good sandwich. He lives in Edmonton, Canada, with his wife and two daughters. For more of his work, follow him on Instagram (@mrkellytindall).
Loading...
or support indie stores by buying on