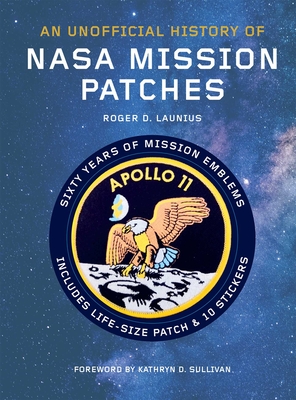 This visual guide details 60 years of NASA's history through the patches astronauts wore on their space missions!


Celebrate 60 years of the U.S. space program with An Unofficial History of NASA Mission Patches, featuring the astronauts’ patches from more than 170 of the most important NASA missions. Each entry includes a full-color image of the patch, details about the space mission, the patch’s design, and the crew. Ten sticker patches and an embroidered patch on the cover make this a unique gift for every space enthusiast.

Dr. Roger D. Launius, a U.S. government historian for 35 years, has served as chief historian for NASA and worked at the Smithsonian Institution’s National Air and Space Museum, most recently as Associate Director for Collections and Curatorial Affairs. He is a Fellow of the American Association for the Advancement of Science, the International Academy of Astronautics, and the American Astronautical Society; and Associate Fellow of the American Institute for Aeronautics and Astronautics. He has written and edited more than 30 books on aerospace history and has been a guest commentator on National Public Radio and major television news networks.

Kathryn D. Sullivan, a geologist and former NASA astronaut, became the ﬁrst woman to walk in space in 1984. She has since served as Under Secretary of Commerce for Oceans and Atmosphere, Administrator of the National Oceanic and Atmospheric Administration, Chair of Aerospace History for the Smithsonian Institution’s National Air and Space Museum, and Senior Fellow at the Potomac Institute for Policy Studies.
Loading...
or support indie stores by buying on