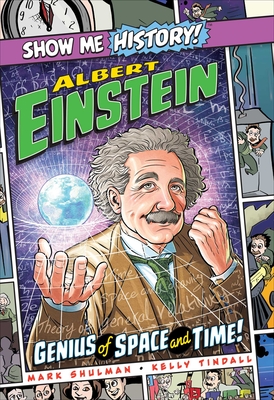 Genius of Space and Time! (Show Me History!)

How did this peace-loving man become the father of the atomic bomb? Find out inside!

By any measure, Albert Einstein changed the ways we understand—and measure—space and time. At first his ideas were ridiculed, but soon they were idolized. Prior to World War II, Einstein was a celebrated figure in Germany, but when the Nazi Party rose to power in the 1930s, he fled for his life and eventually settled in the United States. This proved to be a crucial decision, as his knowledge of physics helped the United States develop the atomic bomb and win the war. Albert Einstein: Genius of Space and Time! recounts the life of the world’s most famous scientist—from his youth in Germany to his final years in the United States. Readers of all ages will be entertained and educated by the full-color illustrations and historically accurate narrative of this graphical biography.

Praise For Albert Einstein: Genius of Space and Time! (Show Me History!)…