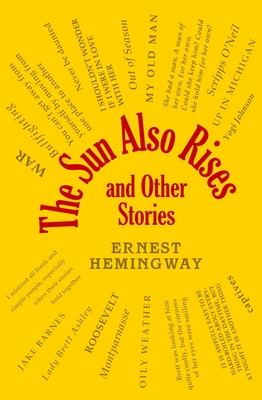 The Sun Also Rises and Other Stories (Word Cloud Classics)

Ernest Hemingway’s masterpiece about American expatriates in 1920s Europe is an essential read for lovers of classic literature. This handsome flexibound edition also features bright foil on the cover.

The Sun Also Rises was Ernest Hemingway’s first novel, and has long been regarded as his finest work. Amid the café society of 1920s Paris, a group of American expatriates seek their identities and independence, traveling to Pamplona, Spain, for the running of the bulls and other life-affirming adventures, showing the Lost Generation as people who were full of exuberance. In addition to the acclaimed novel, this volume includes Hemingway’s novella The Torrents of Spring and the collection Three Stories and Ten Poems.

Ernest Hemingway is regarded as one of the most influential writers of the twentieth century. He was awarded the Pulitzer Prize in 1953 and the Nobel Prize in Literature in 1954. Some of his best-known works include For Whom the Bell Tolls, The Sun Also Rises, The Old Man and the Sea, and A Farewell to Arms. Hemingway passed away in July 1961.
Loading...
or support indie stores by buying on