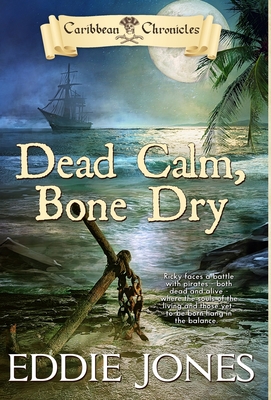 If you were forced to sail with pirates . . . captured and tried for piracy . . . and sentenced to hang . . . would you trade your body to the crew of the "Flying Dutchman" in order to save your soul? Ricky did. Some dead men DO tell tales. And there is stolen treasure in this pirate story.

Last winter Ricky Bradshaw was another gangly freshman hoping to fit in -- or at least not get picked on -- and maybe catch the attention of Becky Nance, a girl in his biology class. Except sometimes Ricky "zones out" in class because he has absence seizures. If you've never heard of absence seizures, that's okay. A lot of people haven't. Ricky's teachers are a lot of those people.

And that's what happened to Ricky last Christmas Eve: he had an episode and ended up in pirate land. When Dead Calm, Bone Dry begins, Ricky is on his way to be tried for piracy. In the ship's brig he is about to learn that some things are worse than being unpopular in high school. MUCH worse. Like sailing to . . . Well, we best let Ricky tell the account. It is his story, after all.