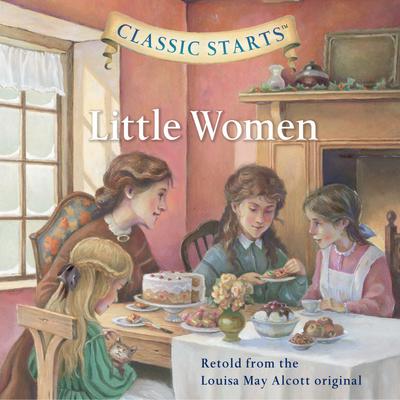 Following Sterling's spectacularly successful launch of its children's classic novels (240,000 books in print to date),comes a dazzling new series: Classic Starts. The stories are unabridged and have been rewritten for younger audiences. Classic Starts treats the world's beloved tales (and children) with the respect they deserve.

Louisa May Alcott's classic novel, set during the Civil War, has always captivated even the most reluctant readers. Little girls, especially, love following the adventures of the four March sisters--Meg, Beth, Amy, and most of all, the tomboy Jo--as they experience the joys and disappointments, tragedies and triumphs, of growing up. This simpler version captures all the charm and warmth of the original.

Louisa May Alcott was born in Germantown, Pennsylvania, in 1832. Two years later, she moved with her family to Boston and in 1840 to Concord, which was to remain her family home for the rest of her life. Her father, Bronson Alcott, was a transcendentalist and friend of Ralph Waldo Emerson and Henry David Thoreau. Alcott early realized that her father could not be counted on as sole support of his family, and so she sacrificed much of her own pleasure to earn money by sewing, teaching, and churning out potboilers. Her reputation was established with Hospital Sketches (1863), which was an account of her work as a volunteer nurse in Washington, D.C. Alcott's first works were written for children, including her best-known Little Women (1868--69) and Little Men: Life at Plumfield with Jo's Boys (1871). Moods (1864), a "passionate conflict," was written for adults. Alcott's writing eventually became the family's main source of income. Throughout her life, Alcott continued to produce highly popular and idealistic literature for children. An Old-Fashioned Girl (1870), Eight Cousins (1875), Rose in Bloom (1876), Under the Lilacs (1878), and Jack and Jill (1881) enjoyed wide popularity. At the same time, her adult fiction, such as the autobiographical novel Work: A Story of Experience (1873) and A Modern Mephistopheles (1877), a story based on the Faust legend, shows her deeper concern with such social issues as education, prison reform, and women's suffrage. She realistically depicts the problems of adolescents and working women, the difficulties of relationships between men and women, and the values of the single woman's life.