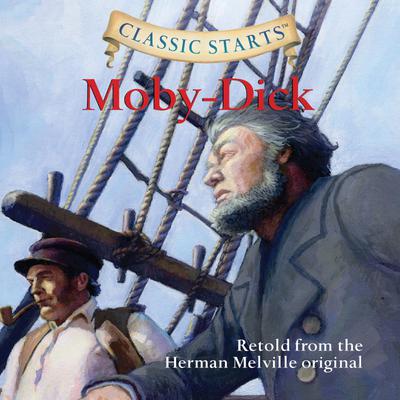 Following Sterling's spectacularly successful launch of its children's classic novels (240,000 books in print to date),comes a dazzling new series: Classic Starts. The stories are unabridged and have been rewritten for younger audiences. Classic Starts treats the world's beloved tales (and children) with the respect they deserve.

Call me Ishmael. These three famous words begin one of America’s most epic novels, a tale of one obsessed captain, his doomed crew, and an elusive white whale named Moby-Dick.  The massive original, however, can be very hard for young readers to navigate.  This beautifully abridged and adventure-filled version will thrill children and whet their appetite for the complete work—when they are ready to tackle it.

Herman Melville (August 1, 1819 - September 28, 1891) was born into a seemingly secure, prosperous world, a descendant of prominent Dutch and English families long established in New York State. That security vanished when first, the family business failed, and then, two years later, in young Melville's thirteenth year, his father died. Without enough money to gain the formal education that professions required, Melville was thrown on his own resources and in 1841 sailed off on a whaling ship bound for the South Seas. His experiences at sea during the next four years were to form in part the basis of his best fiction. Melville's first two books, Typee (1846) and Omoo (1847), were partly romance and partly autobiographical travel books set in the South Seas. Both were popular successes, particularly Typee, which included a stay among cannibals and a romance with a South Sea maiden. During the next several years, Melville published three more romances that drew upon his experiences at sea: Redburn (1849) and White-Jacket (1850), both fairly realistic accounts of the sailor's life and depicting the loss of innocence of central characters; and Mardi (1849), which, like the other two books, began as a romance of adventure but turned into an allegorical critique of contemporary American civilization. Moby Dick (1851) also began as an adventure story, based on Melville's experiences aboard the whaling ship. However, in the writing of it inspired in part by conversations with his friend and neighbor Hawthorne and partly by his own irrepressible imagination and reading of Shakespeare and other Renaissance dramatists Melville turned the book into something so strange that, when it appeared in print, many of his readers and critics were dumbfounded, even outraged. By the mid-1850s, Melville's literary reputation was all but destroyed, and he was obliged to live the rest of his life taking whatever jobs he could find and borrowing money from relatives, who fortunately were always in a position to help him. He continued to write, however, and published some marvelous short fiction pieces Benito Cereno" (1855) and "Bartleby, the Scrivener" (1853) are the best. He also published several volumes of poetry, the most important of which was Battle Pieces and Aspects of the War (1866), poems of occasionally great power that were written in response to the moral challenge of the Civil War. His posthumously published work, Billy Budd (1924), on which he worked up until the time of his death, became Melville's last significant literary work, a brilliant short novel that movingly describes a young sailor's imprisonment and death. Melville's reputation, however, rests most solidly on his great epic romance, Moby Dick. It is a difficult as well as a brilliant book, and many critics have offered interpretations of its complicated ambiguous symbolism. Darrel Abel briefly summed up Moby Dick as "the story of an attempt to search the unsearchable ways of God," although the book has historical, political, and moral implications as well. Melville died at his home in New York City early on the morning of September 28, 1891, at age 72. The doctor listed "cardiac dilation" on the death certificate. He was interred in the Woodlawn Cemetery in The Bronx, New York, along with his wife, Elizabeth Shaw Melville.