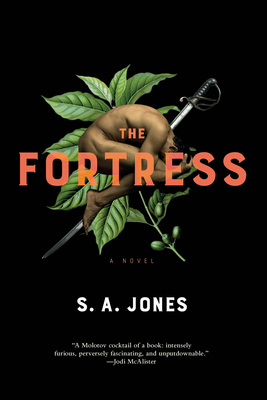 Jonathon Bridge has a corner office in a top-tier law firm, tailored suits and an impeccable pedigree. He has a fascinating wife, Adalia, a child on the way, and a string of pretty young interns as lovers on the side. He’s a man who’s going places. His world is our world: the same chaos and sprawl, haves and have-nots, men and women, skyscrapers and billboards. But it also exists alongside a vast, self-sustaining city-state called The Fortress where the indigenous inhabitants–the Vaik, a society run and populated exclusively by women–live in isolation.

When Adalia discovers his indiscretions and the ugly sexual violence pervading his firm, she agrees to continue their fractured marriage only on the condition that Jonathan voluntarily offers himself to The Fortress as a supplicant and stay there for a year. Jonathon’s arrival at The Fortress begins with a recitation of the conditions of his stay: He is forbidden to ask questions, to raise his hand in anger, and to refuse sex.

Jonathon is utterly unprepared for what will happen to him over the course of the year–not only to his body, but to his mind and his heart. This absorbing, confronting and moving novel asks questions about consent, power, love and fulfilment. It asks what it takes for a man to change, and whether change is possible without a radical reversal of the conditions that seem normal.

Content notice: The Fortress contains references to objectification of and violence against women, pedophilia, sexual assault, submission, and toxic masculinity.


Praise For The Fortress…

★ “Jones’s radical, detailed vision of what extremes it might take to unlearn misogyny is rendered with insight, immediacy, and painful honesty. This gut-punch of a story is sure to start conversations.”  — Publishers Weekly, starred review

“This timely and often uncomfortable read, like The Handmaid’s Tale, is a guaranteed conversation starter for book clubs.” - Booklist

“Unsettling and unashamed, The Fortress is a damning judgement on patriarchy, and a meditation on the labours of atonement.” —Damon Young, award-winning philosopher and author

"What is certain is that The Fortress is not only incredibly timely given the #metoo movement, it’s one of the most exciting novels to come out of Australia in the last decade. Her writing is musical, the story, incredibly powerful and engaging. This is a world completely fleshed out and alive, a colossus in literature, a celebration of the power of words to move and confront." —Better Reading (One of the Decade’s Best Books)

"It's an imaginative exploration of the contours and confines of patriarchy, and what might lay beyond them, as immersive and thought-provoking as the fiction of Ursula Le Guin." —Sydney Morning Herald

"A rallying cry for women. It adds to the chorus of strong female voices reshaping the narrative of gender and power, and imagining the way into a new world." —Books and Publishing

S. A. Jones is a Melbourne-based novelist and essayist whose work has been published in venues including The Guardian. She holds a PhD in history and has been a senior executive and a Shadow Ministerial staffer. In 2013 she was recognized by Westpac and The Australian Financial Review as one of Australia's 100 Women of Influence for her public policy work. The Fortress is her third novel.
Loading...
or
Not Currently Available for Direct Purchase