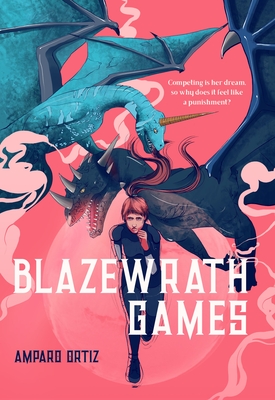 How to Train Your Dragon meets Quidditch through the Ages in this debut fantasy, set in an alternate contemporary world, in which dragons and their riders compete in an international sports tournament

Lana Torres has always preferred dragons to people. In a few weeks, sixteen countries will compete in the Blazewrath World Cup, a tournament where dragons and their riders fight for glory in a dangerous relay. Lana longs to represent her native Puerto Rico in their first ever World Cup appearance, and when Puerto Rico’s Runner—the only player without a dragon steed—is kicked off the team, she’s given the chance.

But when she discovers that a former Blazewrath superstar has teamed up with the Sire—a legendary dragon who’s cursed into human form—the safety of the Cup is jeopardized. The pair are burning down dragon sanctuaries around the world and refuse to stop unless the Cup gets cancelled. All Lana wanted was to represent her country. Now, to do that, she’ll have to navigate an international conspiracy that’s deadlier than her beloved sport.

Amparo Ortiz was born in San Juan, Puerto Rico, and currently lives on the island’s northeastern coast. Her short story comic, “What Remains in The Dark,” appears in the Eisner Award-winning anthology Puerto Rico Strong (Lion Forge, 2018), and SAVING CHUPIE, her middle grade graphic novel, comes out with HarperCollins in Winter 2022. She holds an M.A. in English and a B.A. in Psychology from the UPR’s Río Piedras campus. When she’s not teaching ESL to her college students, she’s teaching herself Korean, devouring as much young adult fiction as she can, and writing about Latinx characters in worlds both contemporary and fantastical.
or support indie stores by buying on
Copyright © 2020 American Booksellers Association