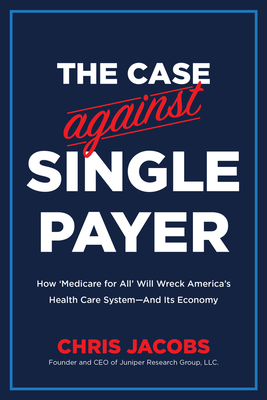 The Case Against Single Payer

Long thought of as an idealistic but unrealistic proposition promoted by far-left activists, single-payer health care has become a major discussion point across the political landscape. Bernie Sanders made it a central focus of his insurgent 2016 run for the Democratic presidential nomination against Hillary Clinton. House Democrats’ messaging on health care in the 2018 midterm elections, and the burgeoning campaign for the 2020 Democratic presidential nomination, have elevated single-payer even further, bringing the issue to the center of American politics. Surprisingly, however, few books have examined the impact of a single-payer health care system in depth—and most of those that have done so come from a leftist perspective supporting this dramatic change. This vacuum in the current literature cries out for a work making the case against single payer—one which educates the American people about the damaging effects of this proposed health care takeover. Written for a broad audience ranging from interested citizens to leaders in the conservative movement, The Case Against Single Payer will explain the harmful implications of giving the federal government unfettered control of the health care system.

Praise For The Case Against Single Payer: How ‘Medicare for All’ Will Wreck America’s Health Care System—And Its Economy …

“Chris Jacobs is completely unique—a Washington conservative who actually cares about heath care and understands how it works, and does not work.” —Bobby Jindal, former Louisiana governor

“Chris Jacobs is one of the sharpest healthcare experts in the conservative movement. His is an essential voice in this debate about the future of our healthcare system and our freedom.” —Mike Lee, Senator

“Chris Jacobs does a great job of breaking down complex policies into plain language accessible to all Americans. This book will allow doctors and patients to understand the details behind the radical Left’s health care takeover.” —Newt Gingrich, former House Speaker

“Chris Jacobs is indisputably one of the sharpest minds in health care reform today. His book is a tour de force for anyone seeking the intellectual ammunition to explain why a single-payer health care system is doomed to fail—and what reforms can make American health care the greatest in the world.” —Jim DeMint, former Senator

“In this book, Chris Jacobs succinctly outlines the damage—massive tax increases, government spending, and federal regulations—that single payer will inflict on the economy. Americans should read this book to see why single payer would put their jobs and futures at risk.”—Dr. Arthur Laffer

Chris Jacobs, the Founder and CEO of Juniper Research Group, has spent more than 15 years studying health care on and off Capitol Hill. He has analyzed health policy and legislation for some of the leading lights of the conservative movement—including Jim DeMint, Bobby Jindal, Mike Pence, Pat Toomey, and Jeb Hensarling. While working for the House Republican Conference under then-Chairman Mike Pence, he helped lead the messaging against Obamacare in the run up to the law’s passage. After the law’s enactment, he continued his work for the Senate Republican Policy Committee, Joint Economic Committee, and Heritage Foundation. Chris serves as a Senior Contributor to The Federalist, and previously contributed to the Wall Street Journal’s Think Tank blog. He has taught classes on health care policy for the Conservative Policy Institute, and at The American University, from which he graduated Phi Beta Kappa with a degree in Political Science and History.
Loading...
or
Not Currently Available for Direct Purchase