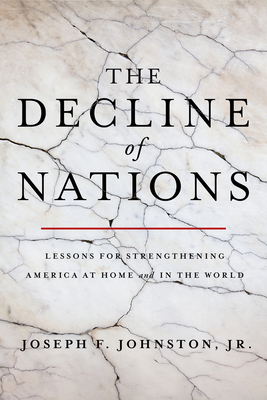 The Decline of Nations

Lessons for Strengthening America at Home and in the World

The Decline of Nations takes an in-depth look at the condition of the contemporary United States and shows why Americans should be deeply concerned. It tackles controversial subjects such as immigration, political correctness, morality, religion and the rise of a new elite class. Author Joseph Johnston provides many historical examples of empires declining, including the Roman and British empires, detailing their trajectory from dominance to failure, and, in the case of Britain, subsequent re-emergence as modern day nation.Johnston delivers riveting lessons on the U.S. government viewed through the lens of excessive centralization and deterioration of the rule of law. He demonstrates the results of weak policies including the surging Progressive movement and the expanding Welfare state. In The Decline of Nations, Johnston asks important questions about diminished military capacity, a broken educational system, and the decline of American arts and culture. He questions the sustainability of the nation’s vast global commitments and shows how those commitments are threatening America’s strength and prosperity.There is no historical guarantee that the United States can sustain its economic and political dominance in the world scene. By knowing the historic patterns of the great nations and empires, there is much to be learned about America’s own destiny.

Praise For The Decline of Nations: Lessons for Strengthening America at Home and in the World …

"Johnston . . . reaches back to the rise and fall of the empires of Rome and Great Britain to diagnose America’s current decline and to seek possible solutions for reversing the decline." —Francis P. Sempa, New York Journal Of Books

"Exceptionally well written, organized and presented, The Decline of Nations: Lessons for Strengthening America at Home and in the World is highly recommended for community, college, and university library in United States History and Contemporary Political Science collections and supplemental curriculum studies lists." —Midwest Book Review

"What makes Johnston’s study special is its comprehensive and integrative character. It is a magisterial analysis of the moral, religious, philosophical, educational, political, legal, cultural, and foreign-policy elements needed for the success or decline of a nation." —Donald Livingston, Chronicles Magazine