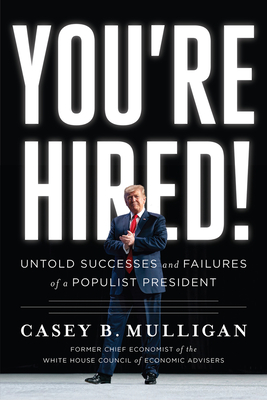 Untold Successes and Failures of a Populist President

Donald J. Trump had essentially zero experience running for office and his candidacy for President of the United States was opposed by many in both parties that dominate American politics. Nevertheless, in 2016 the American people told him “You’re hired!”.
As an insider, scholar, and Chief Economist of the President’s Council of Economic Advisers, Casey Mulligan presents riveting first-hand accounts of President Trump’s engagement with policy and politics. The struggle between Trump and a ruling class is skillfully presented by revealing business practices that President Trump is using to dismantle and reshape the Federal administrative state. It proves that today’s populism has some real substance, but also acknowledges Trump’s political incorrectness. You’re Hired! brilliantly details the administration’s successes and failures alongside the scandals, and accurately portrays the approach and capabilities of our President and our government.
You will feel like an insider as you learn how Trump handles auto companies, Senator Bernie Sanders, immigration, international aid, the 2016 election, Twitter, and more that the news media has often failed to report or explain. Rigorous evidence is detailed on assertions that the White House staff is in perpetual chaos which is directly attributable to the President.
A fascinating comparison of the similarities and differences between Presidents Reagan and Trump is presented along with topics including Obamacare, Putin, the opioid epidemic, and tariffs. This book highlights the great divides created by the President and his “Make America Great Again” (MAGA) supporters being on one side and a small, unelected, and insulated class who have years of experience running, and reporting on the Federal government being on the other side.
Anyone wanting to understand, emulate, or oppose President Trump’s “populist” methods will be enthralled by accurate first-hand accounts of how he engages with policy and politics.

Praise For You’re Hired!: Untold Successes and Failures of a Populist President…

"To understand how strong the bubble is, how it fails, and why populism might make some sense and outlive Trump, read on. On documenting how things work in economic policy, and how you might someday be an effective CEA chief economist, I recommend it most of all. " —John Cochrane, The Grumpy Economist

"[T]he player in the book who most impressed me was the author, Casey Mulligan. He is not just an insightful economist but also a strategist. I’m glad, and Americans who care about our economic well-being, should be glad, that he was there." —David R. Henderson, Hoover Institution

"There are numerous books about President Trump and the supposed inner workings of the Trump White House. Whether they were written by famed journalists or those who claimed to have worked closely with the president, majority of these books seem to only confirm what the president’s detractors already believed — that the president doesn’t know what he’s doing; he’s unpredictable; he spends all his time on tweeting false or exaggerated statements. Amidst the array of these indistinguishable narratives, it is refreshing to find a book such as You’re Hired: Untold Successes and Failures of a Populist President, which casts both Trump and his White House in a very different light." —Helen Raleigh, The Federalist

"You're Hired: Untold Successes and Failures of a Populist President by Chicago University's Casey B. Mulligan is one of the few serious books about the Trump presidency, at least in economic policy terms." —John Phelan, Center of the American Experiment, Economic Affairs

The Wall Street Journal calls him “The economist who exposed Obamacare.” Casey B. Mulligan, Professor of Economics at the University of Chicago, received his Ph.D. in economics from the University of Chicago in 1993. Mulligan has been a visiting professor at Harvard University, Clemson University, and the Irving B. Harris Graduate School of Public Policy Studies. He served as Chief Economist of the White House Council of Economic Advisers during 2018 and 2019.

Mulligan has written widely on discrepancies between economic analysis and conventional wisdom. Before You’re Hired!, he wrote Chicago Price Theory (with Jaffe, Minton, and Murphy), Side Effects and Complications, The Redistribution Recession, and Parental Priorities and Economic Inequality. He has also written numerous opeds and blog entries for the New York Times, the Wall Street Journal, the New York Post, the Chicago Tribune, http://blogsupplyanddemand.com, and other blogs and periodicals. Follow @caseybmulligan on Twitter.