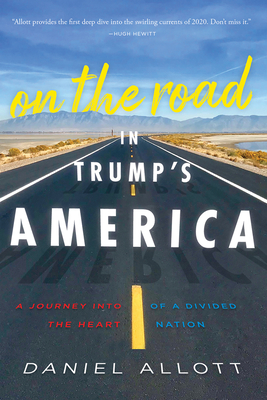 On the Road in Trump’s America

A Journey Into the Heart of a Divided Nation

This has been particularly true in the Trump era. Most political journalists failed to anticipate Donald Trump’s rise because they are utterly unable to understand his appeal. From the start, they treated Trumpism as a pathology. They dismissed his voters as being guided by bigotry, ignorance, and fear. Needless to say, this has skewed their coverage.

Worst of all, no one seems to have learned anything. The media malpractice that characterized the 2016 presidential campaign has arguably become even worse during the Trump presidency. Most of the media have remained unwilling or unable to understand and objectively report on the people and places that put Trump in the White House. When reporters do venture into “Trump’s America,” they typically parachute in for only a few hours in search of evidence to confirm their pre-written narratives.

Daniel Allott decided to take a different approach. In the spring of 2017, he left his position at a Washington, D.C. political magazine and began reporting from across the country. He spent much of the following three years living in and reporting from nine counties that were crucial to understanding the 2016 election; they will be equally crucial to determining who will win in 2020.

This book is not just a study of Trump voters. Allott spoke with as many people as he could regardless of their politics; farmers and professors; congressmen and homeless people; refugees and drug addicts; students and retirees; progressives, conservatives, and people with no discernible or consistent political ideology. His one preference was for “switchers” — people who voted one way in 2016 and have subsequently changed their minds ahead of the 2020 election. Allot discovered that these voters are like an endangered species in Trump’s America.

Allott’s goal wasn’t simply to learn why people had voted the way they did in 2016, or to predict how they might vote in 2020. It was also to chart how their lives and circumstances changed over the course of Trump’s first term in office, and how the values and priorities that inform their political views might have changed.

The accounts will challenge preconceived ideas about who the people in these places are, what motivates their decisions, and what animates their lives.


Praise For On the Road in Trump’s America: A Journey Into the Heart of a Divided Nation…

"This is a fascinating, one-of-a-kind book that does an extremely deep dive into the mood of the electorate as the nation heads into another presidential election." —Bob Cusack, Editor in Chief, The Hill Newspaper

"Allott didn’t just parachute in; he got to know and establish friendships across the country, and On the Road in Trump’s America will help readers understand 21st-century America as they never have before.” —Michael Barone, Washington Examiner Columnist, American Enterprise Institute Resident Fellow and Co-Author of The Almanac of American Politics

"What Allott’s book tells us, that, perhaps we already do know is how increasingly tribalistic American politics has become and how little listening is happening between factions. And we are reminded that among the most distrusted institutions is the media." —Tara Sonenshine, New York Journal of Books

Daniel Allott is an opinion editor at The Hill newspaper. He was previously the Washington Examiner’s deputy commentary editor. He has also been a freelance writer and contributor to Investor’s Business Daily’s Leaders and Success page. Daniel has written for the New York Times, Wall Street Journal, Politico, USA Today, National Review, and dozens of other publications. He has also edited more than a dozen books. He’s a former National Review Institute Washington Fellow. Daniel is a graduate of the University of Wisconsin- Madison and Georgetown University’s Public Policy Institute. He was born in Reading, England, and has lived in England, New York, Wisconsin, Hawaii, Spain, and Washington, D.C
Loading...
or
Not Currently Available for Direct Purchase