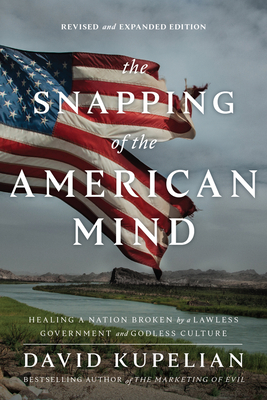 The Snapping of the American Mind

Healing a Nation Broken by a Lawless Government and Godless Culture

“A must-read if you really want to understand the world we live in and where it’s headed.” – SEAN HANNITY

"David Kupelian's The Snapping of the American Mind chronicles the decline and fall of America and shows that it is no accident, but rather a direct result of progressive misrule?an eye-opening, scary and galvanizing book." – DINESH D’SOUZA

“David Kupelian has once again given us a must-read in these times of political turbulence and cultural insanity." – PAUL KENGOR

AMERICA THE BEAUTIFUL HAS BECOME AMERICA THE BIZARRE. Government promotes shockingly deranged policies while purposely turning citizens against each other, Christians are prosecuted as criminals, children "transition" to the opposite sex, crime skyrockets and 130 million Americans depend on mind-altering substances just to get through life.

Turbocharged by the Obama presidency and continuing into the present day, long-coalescing forces of the political and cultural Left are bringing about their much-heralded “fundamental transformation of America.” That much everyone knows.

But this revolution is also causing a fundamental transformation of Americans in profoundly negative ways. In The Snapping of the American Mind, veteran journalist and bestselling author David Kupelian shows how the progressive Left which today dominates America’s key institutions, from the news and entertainment media, to Big Tech, to education, to government itself is accomplishing much more than just enlarging government, redistributing wealth, and de-Christianizing the culture. With the Left’s wild celebration of sexual anarchy, its intimidating culture of political correctness, and its incomprehension of the fundamental sacredness of human life, it is also, whether intentionally or not, promoting widespread dependency, debauchery, family breakdown, crime, corruption, addiction, despair, and suicide.

Surveying this growing chaos in American society, Kupelian exposes both the utopian revolutionaries and their extraordinary methods that have turned America’s most cherished values literally upside down to the point that madness is celebrated and normality demonized.

Praise For The Snapping of the American Mind: Healing a Nation Broken by a Lawless Government and Godless Culture…

"In The Snapping of the American Mind, David Kupelian makes it crystal clear that the Left's first and ultimate target is none other than the American mind itself. In an era when our nation's Judeo-Christian foundation is coming under increasingly open and brutal attack, Kupelian's powerful and redemptive book couldn't have come at a better time." – DAVID BARTON, historian, author, and founder of WallBuilder

"David Kupelian is one of the very few must-read writers in the twenty-first century. He has the insight and wisdom to perceive the true state of the culture and the world, and he has the incredible ability to tell the Truth in a readable manner that helps the reader not only understand the Truth, but to understand how to redeem America's culture as well." – DR. TED BAEHR, Chairman of the Christian Film and Television Commission, and publisher of MovieGuide

"The Snapping of the American Mind brilliantly switches on a very bright light in the reader’s mind, illuminating all the lies, deceptions, and illusions with which the Left has successfully captured millions of Americans’ hearts and minds. An absolute must-read." – JAMIE GLAZOV, editor of Frontpagemag.com and host of The Glazov Gang

"As every form of evil, unethical, ridiculous, bizarre behavior is normalized by the mainstream gatekeepers of America, we ask ourselves, 'Are we losing our minds as a society?' Kupelian answers that question with a resoundingly well-researched conclusion. Read it!" – MICHELE BACHMANN, former congresswoman and Republican presidential candidate

“With extraordinary insight from diverse perspectives, author David Kupelian reveals the Far Left’s America-hating assault on the foundations of societal sanity. This book is a stunning exposé of all that is evil and delusional in the Liberal-Progressive plan to destroy the American miracle. A moral tour de force!” – LYLE ROSSITER, M.D., forensic and general psychiatrist and author of The Liberal Mind

"As David Kupelian documents, this transformation, which includes de-Christianizing our culture, indoctrinating our children, and forcing acceptance of all sorts of bizarre sexual and social behavior, is taking a terrible toll on the American people's mental, emotional and spiritual wellbeing. Fortunately, Kupelian also points the way to national and personal renewal." – PHYLLIS SCHLAFLY, author, lawyer and founder of Eagle Forum

“Maybe once in a generation are we so graced with a communicator like David Kupelian. His matchless ability to unpack the complicated issues of our day with absolute crystal clarity is nothing short of genius, a gift from God which he has shared once more. In The Snapping of the American Mind, David explores the root cause of our age of lawlessness and moral anarchy, yet somehow leaves us filled with hope for American revival and renewal. It's just the book Americans need at such a time as this.” – MATT BARBER, columnist, lawyer and co-founder of Christian Civil Rights Watch

David Kupelian is an award-winning American journalist, vice president and managing editor of online news giant WorldNetDaily (WND.com), editor of Whistleblower magazine, and a widely read columnist. He is also the bestselling author of three influential books—"The Marketing of Evil," its sequel "How Evil Works," and most recently, "The Snapping of the American Mind: Healing a Nation Broken by a Lawless Government and Godless Culture." An eloquent culture warrior, whose penetrating insights have made his books perennial favorites, Kupelian has been featured on Fox News, MSNBC, C-SPAN, CBN, and many other TV and radio venues.
Loading...
or support indie stores by buying on
(This book is on backorder)