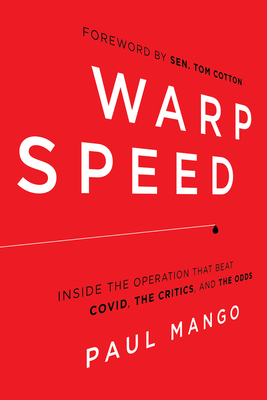 Inside the Operation That Beat COVID, the Critics, and the Odds

A powerful story of how our nation’s leaders overcame the odds, saving the American people from the throes of a deadly pandemic. The prior record for vaccine development and distribution was approximately 4.5 years. Operation Warp Speed got the COVID-19 vaccine to the American people in less than 10 months. Operation Warp Speed did not happen by accident. It was the result of exceptional leadership, explicit strategy, and unprecedented teamwork. Author Paul Mango, the foremost leader of Operation Warp Speed and the former deputy chief of US Health and Human Services, chronicles the challenges and real dangers of developing the vaccine. From the beginning, two lead scientists, Dr. Moncef Slaoui and Dr. Debra Birx, fought head to head on which vaccines had the greatest probability of success. Tensions grew as the Army Materiel Command and the Center for Disease Control debated on whether public health agencies or the private sector would take over vaccine distribution. Mango details the largest hurdle for the Operation Warp Speed team: though Pfizer, the first distribution company to deliver the mRNA vaccine, sought aid from the Federal Government, they refused the government’s request to oversee safe manufacturing of the vaccine, eventually leading to a major scandal as Pfizer missed its contractual obligation to deliver 40 million doses by the end of 2020, the number of positive cases reaching a frightening peak all the while. In this harrowing, behind-the-scenes account of the most successful public-private partnership since World War II, we learn how the nation’s biggest leaders accomplished the impossible. Through sheer will and exceptional commitment, a small group of leaders fulfilled its mission, making the United States the only country in the world which could offer a vaccine to any citizen by April 2021, scarcely 14 months after the genetic identification of the virus.

Praise For Warp Speed: Inside the Operation That Beat COVID, the Critics, and the Odds…

"Operation Warp Speed was one of the most impressive life-saving projects of our lifetime—the development of a vaccine in ten months that saved millions of lives across the planet, put the world back to work and allowed life to return to normal. Paul Mango’s account of how the vaccine was conceived, developed, manufactured, distributed and administered, all in record time and without a hitch, is the story of deregulation and public-private sector success, and the story of competence, determination, and the force of will. Let’s use an Operation Warp Speed to cure cancer, MS, and Alzheimer's." —Stephen Moore, former Trump senior economist

"When Paul Mango, a respected expert in healthcare, went to Washington, he never expected to face the largest public health crisis in a century. In his new book, Mango takes us inside the room for one of America’s greatest accomplishments: distributing millions of doses of safe and effective vaccines within one year of identifying the Covid virus. Paul gives us his insider’s view on who and what made that possible, as well as lessons to help us cope with the next pandemic." —Trevor Fetter, Former CEO, Tenet Healthcare, and current Lecturer, Harvard Business School

"Congratulations to Paul Mango on his new book, Warp Speed: Inside the Operation that Beat Covid, the Critics, and the Odds, which tells the story of how my Administration, in record time, delivered vaccines and therapeutics to the American people to fight the China Virus. What we achieved was incredible, but it is sad to see what Biden has done with it (no mandates!). Great job, Paul!" --Donald J. Trump, 45th President of the United States of America

"The simply amazing story behind the development of anti-Covid vaccines is told in riveting detail and clearly laid out for the general public by someone who was there at every stage of this medical miracle that was accomplished in a time of dire peril for the nation (and the world!)." —Michael Dunford, Midwest Book Review