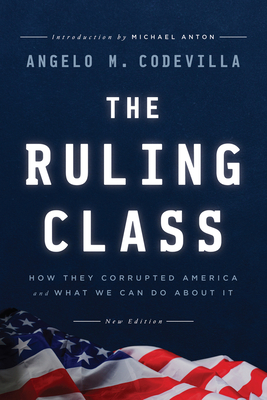 In this profound and incisive work, Angelo M. Codevilla introduces readers to the Ruling Class, the group of bipartisan political elites who run America. This Ruling Class, educated at prestigious universities and convinced of its own superiority, has everything to gain by raising taxes and expanding the reach of government. This class maintains that it knows what is best and continually increases its power over every facet of American life, from family and marriage to the environment, guns, and God. It is becoming increasingly apparent that this Ruling Class does not represent the interests of the majority of Americans, who value self-rule and the freedom on whose promise America was founded. Millions of Americans are now reasserting our right to obey the Constitution, not the Ruling Class. This desire transcends all organizations and joins independents, Republicans, and Democrats into The Country Party, whose members embody the ideas and habits that made America great. The majority of Americans feel that the Ruling Class is demeaning us, impoverishing us, demoralizing us, and want to be rid of it

Angelo M. Codevilla received a B.A. from Rutgers University, an M.A. from Notre Dame University, and a Ph.D. from the Claremont Graduate School. He served as an officer in the U.S. Navy, was a U.S. Foreign Service Officer, Senior Research Fellow at the Hoover Institution at Stanford University, Senior Fellow of the Claremont Institute. While serving on the staff of the U.S. Senate Select Committee on Intelligence (1977–1985), he helped draft technology programs that would produce the 1983 Strategic Defensive Initiative. An author of 18 books and countless essays and articles, covering topics from French and Italian politics to the thoughts of Machiavelli and Montesquieu to arms control, war, ballistic missile defense technology, and a range of other international topics, Codevilla’s writings consistently exposed the perils of mindlessly embracing establishment thought. Codevilla was named professor emeritus of International Relations at Boston University in 2005. He lived on his vineyard in Amador County, California and his cabin near Dubois, Wyoming, writing and speaking on contemporary American and international politics until his death in September 2021. He is survived by Ann, his wife of fifty-five years, their five children, and nine grandchildren.
Loading...
or support indie stores by buying on