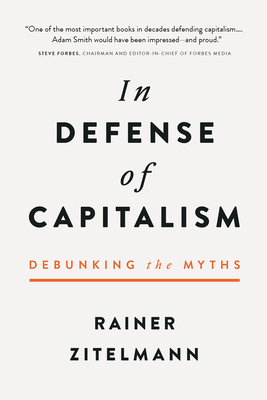 In Defense of Capitalism

Rainer Zitelmann examines the ten most common objections to capitalism: capitalism leads to hunger and poverty, to rising inequality, to unnecessary consumption, to environmental destruction, to climate change and wars. Capitalism, its critics say, prioritizes profits over humanity, creates dominant monopolies, and undermines democracy. Zitelmann scrutinizes each of these arguments in turn and reveals the critical flaws that debunk them. He offers counter arguments to each charge, deploying a wealth of historical evidence and eye-opening facts to prove that it is not capitalism that has failed, but a century of anti-capitalist experiments.

The second part of the book explores popular perceptions of capitalism in Europe, the USA, Latin America and Asia and is based on a specially commissioned Ipsos MORI poll of 21 countries, the results of which are presented here for the first time.

From 1987 to 1992, Zitelmann worked at the Central Institute for Social Science Research at the Free University of Berlin. He then became editor-in-chief of Ullstein-Propyläen publishing house, at that time Germany’s third largest book publishing group and headed various departments of the German daily newspaper Die Welt. In 2000, he set up his own business, Dr. ZitelmannPB. GmbH, which he established as the market leader for communication for real estate companies in Germany. He sold the business in 2016.

In 2016, Zitelmann was awarded his second doctorate, this time in sociology, with his thesis on the psychology of the super-rich (published as The Wealth Elite) at the University of Potsdam. Zitelmann is a multiple bestselling author and his 26 books have been translated into numerous languages, including this book, which will be published in 30 languages. He is a much sought-after guest speaker in Asia, the United States, Latin America and Europe. Over the last few years, he has written articles and given interviews to many of the world’s leading media, including The Daily Telegraph, The Times, Forbes, Le Monde, Corriere de la Serra, Frankfurter Allgemeine Zeitung, Der Spiegel, Neue Zürcher Zeitung, and numerous media in Poland, China, Vietnam, Brazil, Chile, and Argentina. Detailed information about the life of Rainer Zitelmann can be found at rainer-zitelmann.com.