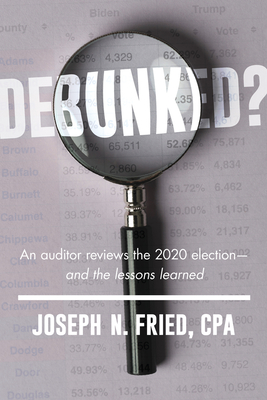 A Professional Auditor Reviews the 2020 Election

Perhaps no issue in America has been more polarizing than the 2020 Presidential election. On one side there are claims of a “stolen” election, foreign infiltration of election equipment, middle-of-the-night ballot dumps, and impossible mathematical anomalies. On the other side, everything is dismissed as “baseless,” “debunked,” and “conspiratorial.”

This controversy goes directly to the integrity of our vote, a topic that should interest and concern us all. Yet despite the importance of this controversy, very little objective analysis is available, and there is a reason. Some people are afraid to touch this subject. A careless comment could cause the loss of friends, business, and even employment.

Debunked? fearlessly fills this void—with facts. Written by a veteran auditor, it provides a reasoned, in-depth examination of the many controversies in the election, including:

Those issues, and many more, are analyzed thoroughly, fairly, and respectfully.

Without a doubt, the most controversial section of the book will be the detailed and quantified analysis of the election in each of 6 swing states: Arizona, Georgia, Michigan, Nevada, Pennsylvania, and Wisconsin. For each of those states, the decision to certify the election is given a thumbs up—or down. Conclusions are fully supported.

The sanctity of our vote could easily be considered the key footing in the foundation of our democracy. But, given the extreme censorship of this subject, the public is largely unaware of the issues in this book. Reading it provides important insights into one of the key controversies of our age and should, perhaps, encourage us all to demand that our votes are considered sacrosanct.

Joe attended Case Western Reserve University on full scholarship, graduated with an MBA, and was hired as an auditor by Ernst & Young. In 1983 he formed his own firm, from which he retired in 2022. During his 40-year career, Joe performed and supervised countless audits, and was AICPA-authorized peer reviewer for dozens of other audit firms.

In 2003, Joe published his first book, How Social Security Picks Your Pocket, which chronicled the waste in the program, and called for a private option for participants. After publication, Joe was invited to share his thoughts in a 2-hour program called “A Conversation on Social Security.” The other 5 contributors were President George W. Bush, Senator Grassley, Congressman JC Watts, Columnist David Hogberg, and the host, Jan Mickelson.

Following the 2008 financial crisis, Joe wrote a unique book called, Who Really Drove the Economy into the Ditch. Unlike other analysts, Joe described the roots of the crisis, which went back to the early days of the Clinton Administration, and its push to eliminate the down payment requirement for home mortgage loans.