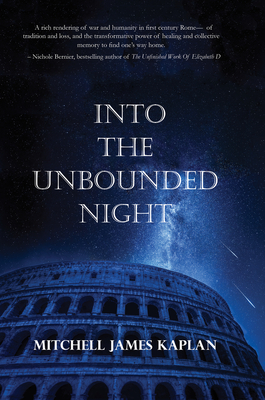 Into the Unbounded Night

When her village in Albion is sacked by the Roman general Vespasian, young Aislin is left without home and family. Determined to exact revenge, she travels to Rome, a sprawling city of wealth, decadence, and power. A “barbarian” in a “civilized” world, Aislin struggles to comprehend Roman ways. From a precarious hand-to-mouth existence on the streets, she becomes the mistress of a wealthy senator, but their child Faolan is born with a disability that renders him unworthy of life in the eyes of his father and other Romans. Imprisoned for her efforts to topple the Roman regime, Aislin learns of an alternate philosophy from her cellmate, the Judean known today as the apostle St. Paul. As the capital burns in the Great Fire of 64 AD, he bequeaths to her a mission that will take her to Jerusalem. There, Yohanan, son of Zakkai, has been striving to preserve the tradition of Hillel against the Zealots who advocate for a war of independence. Responding to the Judeans’ revolt, the Romans—again under the leadership of Vespasian—besiege Jerusalem, destroying the Second Temple and with it, the brand of Judean monotheism it represents. Yohanan takes on the mission of preserving what can be preserved, and of reinventing what must be reinvented.

Praise For Into the Unbounded Night…

"Into the Unbounded Night is a historical thriller set during the Roman first century and tells of young Aislin, who becomes a homeless orphan when a Roman general sacks her village in Britannia. Most stories would end here, but Mitchell James Kaplan doesn't let his young protagonist die on the vine. Into the Unbounded Night…is an outstanding piece that cements action and intrigue with a sense of place, purpose, and perspective" —Diane Donovan, Midwest Book Review