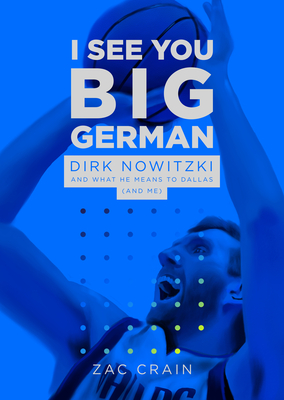 I See You Big German

Dirk Nowitzki and What He Means to Dallas (and Me)

In the 1990's, Dallas was a basketball wasteland. Along came Dirk Nowitzki, a towering W rzburg, Germany native with a cool efficiency and the ability to make shots from seemingly impossible angles. In the years thereafter, Nowitzki would spend his entire 21-season NBA career with the Dallas Mavericks, the longest tenure of any one player with one team in the league's history, and lead them to their first and only NBA championship, while being named a 14-time All-Star, a 12-time All-NBA Team member, and the first European player to receive the NBA's Most Valuable Player Award.

Zac Crain, award-winning journalist for D Magazine who moved to Dallas the same year that Nowitzki began his career in the city, memorializes Nowitzki's career through a lyric essay reminiscent of Hanif Abdurraqib's Go Ahead in the Rain that mixes the author's story with the basketball legend's, charting the highs and lows (and mostly highs) of the Mavs' all-time statistical leader's career. By paying homage to Dallas' star basketball player, author Zac Crain connects the Mavs' success with the growth of the city itself, and what the sport means to Dallas' now basketball-obsessed citizens.

Zac Crain is senior editor of D Magazine. He has written about the explosion in West, Texas; legendary country singer Charley Pride; Tony Dorsett's struggle with life after football; and imaginary meetings with a mosquito and a Pegasus. Crain is the author of A Pedestrian's Recent History of Dallas, published by Deep Vellum in 2020, as well as 2009's Black Tooth Grin: The High Life, Good Times, and Tragic End of "Dimebag" Darrell Abbott. He lives in Dallas.
Loading...
or support indie stores by buying on