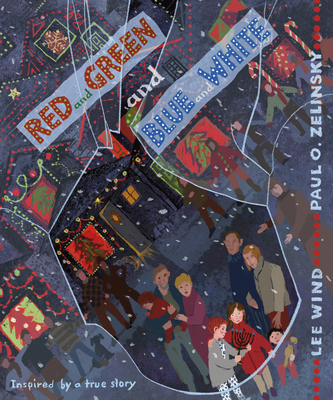 Red and Green and Blue and White

Inspired by a true story, this is a tale of a community that banded together to spread light.

It's a holiday season that both Isaac, whose family is Jewish, and Teresa, whose family is Christian, have looked forward to for months! They've been counting the days, playing in the snow, making cookies, drawing (Teresa) and writing poems (Isaac). They enjoy all the things they share, as well as the things that make them different.

But when Isaac's window is smashed in the middle of the night, it seems like maybe not everyone appreciates "difference."

★ "Zelinsky has covered every page with bright colors, with optional text that dances through the pictures and occasional vignettes that add detail and movement to the story. This is a strong addition to holiday stories, one that can be reread and rediscovered many times and whose theme of community support and friendship is appropriate year-round." —School Library Connection, starred review

"[A] quiet, uplifting tale. . . . Readers will feel heartened at children's power to influence others to stand up for justice and defeat vile prejudice. . . . The true meaning of the holiday season shines here." —Kirkus Reviews

Praise For Red and Green and Blue and White…


[STAR] “A strong addition to holiday stories, one that can be reread and rediscovered many times and whose theme of community support and friendship is appropriate year-round.” -School Library Connection (starred),


[STAR] “Captures the celebratory joys of the season. ”-The Horn Book (starred),


“Vibrant and compassionate...Wind and Zelinsky's offering gives young readers an inspirational, empathy-building story about honoring your identity and standing up against hate. Stronger together, indeed.” -Shelf-Awareness,


"Wind’s pitch-perfect text is elegantly spare, accessible on many levels, and lyrical enough to invite multiple read-alouds. Caldecott Medalist Paul O. Zelinsky’s gorgeous art captures the magic of holiday lights in the night, and expresses the story’s shifting moods - from playful, to briefly worrying, to heartwarming. RED AND GREEN AND BLUE AND WHITE is an important, inspiring story about the power of love to overcome hate, a timely and inclusive take on the Chanukah theme of light overcoming darkness, and a strong contender for the Sydney Taylor Book Award.”-Sydney Taylor Schmooze ,


"Red and Green and Blue and White is a wonderful story about standing up for what is right, supporting others and respecting differences. Excellent illustrations complement the text. This is an important book for parents to read with their children and for teachers to share with their students.”-Glenn Perrett, Syndicated Columnist, Metroland Media,


"This lovely picture book deals with the difficult topic of antisemitism beautifully, in an accessible and age appropriate way.” -Association of Jewish Libraries, Holiday Highlight


“We come together in strength. It's a message the world can use, throughout the year.” -The New York Times,

Lee Wind, M.Ed. is the author of the MG nonfiction No Way, They Were Gay?: Hidden Lives and Secret Loves and the YA novel Queer as a Five-Dollar Bill. Lee works for IBPA and SCBWI, and lives in Los Angeles with his husband and their teenage daughter, where he writes stories to empower kids and teens to change the world. Visit him online at www.leewind.org.

Paul O. Zelinsky has become recognized as one of the most inventive artists in the field of children's literature. Among his many honors are the 1998 Caldecott Medal for Rapunzel, as well as Caldecott Honors for three other books: Hansel and Gretel (1985), Rumpelstiltskin (1987), and Swamp Angel (1995). In 2018, Paul was given the Carle Honor Award for Illustration. He lives with his wife in Brooklyn, New York. They have two grown daughters.
Loading...
or support indie stores by buying on
(This book is on backorder)