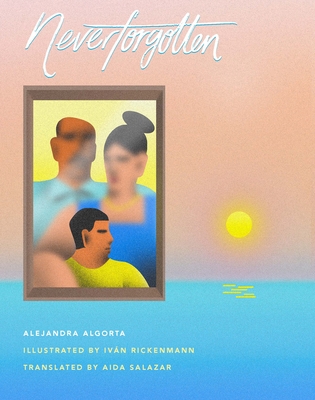 “Neverforgotten is gorgeous. It is as simple as that — gorgeous. It’s a story that absorbs the reader, that through words and drawings carries us to Bogotá, while at the same time brings us to our own thoughts and memories of moments when our lives shifted.”
— Connie Griffin, Bookworks (NM), Albuquerque, NM
View the List

★ "Poetic...lyrical and moving novel with a melancholic ode to coming of age."—Foreword Reviews (starred)

★ "An unmissable tale about loss and reclamation."—Kirkus (starred)

"A memorable and meaningful ride."—Horn Book

Fabio flies through the streets of Bogotá on his bicycle, the children of his neighborhood trailing behind him. It is there that life feels right—where the world of adults, and their lies, fades away. But then one day, he simply forgets. Forgets how to ride his bicycle. And Fabio will never be the same again.

From Colombia comes a special debut talent, Alejandra Algorta, and a first novel of discovery and heartbreak. Algorta's distinct and poetic prose has been translated by award-winning author Aida Salazar, and presented in English and Spanish.

“A memorable and meaningful ride.”- The Horn Book,


[STAR] “Quiet, emotive illustrations reminiscent of Allen Say’s and Brian Selznick’s, pull readers onto the streets of Bogotá, where dust announces the arrival of the children who ride in bicycle packs, providing a view of busy streets and the barrio. The book is presented in both English and Spanish versions; Salazar’s translation masterfully replicates the distant-yet-confiding tone of Algorta’s Spanish original, fully conveying the story and its vivid images. An unmissable tale about loss and reclamation.”-Kirkus Reviews (starred),


[STAR] “Poetic...lyrical and moving novel with a melancholic ode to coming of age.” -Foreword Reviews (starred),

Alejandra Algorta is a writer and editor from Bogotá. She is the founder and editor of the poetry publishing house, Cardumen. Neverforgotten is her debut novel.

Iván Rickenmann is a painter and professor from Bogotá, who has exhibited his work worldwide. He is particularly interested in abandoned spaces that allow you to witness the passage of time. This is his first book for children.

Aida Salazar is the author of the verse novels The Moon Within, winner of the International Latino Book Award, and Land of the Cranes, winner of a NCTE Charlotte Huck Award Honor. She is a founding member of Las Musas. She lives with her family of artists in a teal house in Oakland, CA. Neverforgotten is her first book of translation.
Loading...
or support indie stores by buying on