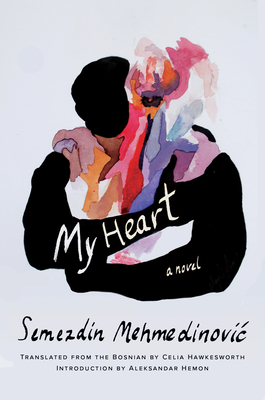 "Intelligent, honest, and full of heart," My Heart is an intimate work of autobiographical fiction by one of ex-Yugoslavia's greatest writers about his family's experience as refugees from the Bosnian war—a timeless story of love, memory, and the resilience of the human spirit that "has all the qualities one might seek in a friend" (Etgar Keret, author of The Seven Goods Years).

"Today, it seems, was the day I was meant to die." When a writer suffers a heart attack at the age of fifty, he must confront his mortality in a country that is not his native home. Confined to a hospital bed and overcome by a sense of powerlessness, he reflects on the fragility of life and finds extraordinary meaning in the quotidian. In this affecting autobiographical novel, Semezdin Mehmedinovic explores the love he and his family have for one another, strengthened by trauma; their harrowing experience of the Bosnian war, which led them to flee for the United States as refugees; eerie premonitions of Donald Trump's presidency; the life and work of a writer; and the nature of memory and grief.

Poetically explosive and pure to the core, My Heart serves as a kind of mirror, reflecting our human strengths and weaknesses along with the most important issues on our minds--love and death, the present and the past, sickness and health, leaving and staying.

Praise For My Heart: A Novel…

"Semezdin Memedinović charts the collapse of a world with heartbreaking clarity and precision . . . conveys the same clear-eyed passion for the truth that one finds in the young Hemingway, the Hemingway of our time." —Paul Auster

"Calm and contemplative, softened by melancholy humor and always alive to beauty . . . Throughout 'My Heart,' Mr. Mehmedinović takes up the exile’s perpetual investigation into memory, trying to reconcile the defining traumas of the past with the tendency of time to scrub them away: 'Remembering and forgetting stand side by side, they’re made of the same substance.' That substance, whatever it is, pulses throughout this noble and large-souled work of literature." —Sam Sacks, The Wall Street Journal

"Though it deals with tragedy, My Heart is never depressing, partly because of the beauty of the language—expertly translated from the Bosnian by Celia Hawkesworth—and partly because of its depth and honesty of emotion, its intelligence and generosity of spirit, and the precision and originality of Mehmedinovic’s observations . . . [A] powerful, at once profound and charming book." ––Francine Prose, The New York Times Book Review

"A tender, profound autobiographical novel that contemplates mortality, family, intimacy, and identity, My Heart feels particularly resonant right now, as so many of us are grappling with the frail of life, and how a sudden illness can cut it all too short at a moment's notice. Mehmedinović comes from the former Yugoslavia; he and his family became refugees to the United States during the Bosnian war, and so this novel also explores other seemingly foundational but actually quite fragile constructs: the meanings of home, of safety, and of belonging." ––Kristin Iversen, Refinery29, One of the Best New Books of the Year

"The prose in this autobiographical novel is lyrical, resonant, evocative—a necessary quality for a story so rooted in the mind. (Credit must go to Celia Hawkesworth for her beautiful translation, as well.) . . . His reflections are ultimately life-affirming, lingering in memories of profound love and strength, ever hopeful about the human capacity for finding and creating meaning." —Arianna Rebolini, BuzzFeed

"A moving meditation on trauma, grief, love, and what it means to mourn for people who are still alive and places that still exist, but not as they once were." ––Emily Burack, Alma

"My Heart tells us that increasingly our lives are shaped by griefs that no one can escape and thus make us resemble each other. Obsessed with the burst and fading of memory, Mehmedinović watches for evidence that his internal impulses still pertain in a frightening world. There is discovery in this effort–even if 'every word of this diary will be forgotten.'" ––Ron Slate, On the Seawall

"Heartbreaking without ever being bleak . . . Mehmedinović captures his most evocative snapshots in words, as when he looks out from the car and sees 'some soldiers . . . slowly moving in all directions, all with their heads bowed, as though they are looking for a lost earring in the desert' . . . Celia Hawkesworth’s English translation beautifully renders Mehmedinović’s limpid style." ––Irina Dumitrescu, The Times Literary Supplement

"A powerful autofictional gut punch of a novel . . . Few books are this good at capturing an immigrant’s sense of loss." ––Publishers Weekly (starred review)

"An intimate, yet profound and lyrical portrait of a man and his family . . . Superbly translated by Celia Hawkesworth, My Heart is an introspective, literary journey worth taking." ––Booklist (starred review)

"An interrogation of a Bosnian past from a place of trauma and displacement, which parallels the turnstiles of love and family, themes and topics around which the book’s heart is centered . . . There’s no other writer who conveys with such grace what can happen to the heart—physical, emotional, and in its memory. This will be one of the best books of 2021." ––Literary Hub, One of the Most Anticipated Books of the Year

"Mehmedinović’s poetic side reveals itself via achingly beautiful imagery and recurring motifs. And he is a remarkably prescient observer of America . . . A deeply personal and incisive look at memory, anchored by astute observations." ––Kirkus Reviews

Semezdin Mehmedinović was born in 1960 in Kiseljak near Tuzla. He studied comparative literature at the Faculty of Philosophy in Sarajevo. A poet and an essayist, Mehmedinović has held the position of an editor in newspapers, weeklies, as well as on the radio and television. He has edited a number of culture magazines and has been involved in the film industry. Sarajevo Blues and Nine Alexandrias have been published among his other works. Since 1996, he has been living in the United States.
Loading...
or support indie stores by buying on