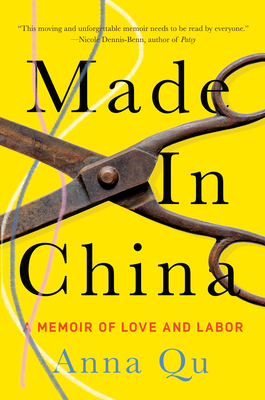 A Memoir of Love and Labor

A young girl forced to work in a Queens sweatshop calls child services on her mother in this powerful debut memoir about labor and self-worth that traces a Chinese immigrant's journey to an American future.

As a teen, Anna Qu is sent by her mother to work in her family's garment factory in Queens. At home, she is treated as a maid and suffers punishment for doing her homework at night. Her mother wants to teach her a lesson: she is Chinese, not American, and such is their tough path in their new country. But instead of acquiescing, Qu alerts the Office of Children and Family Services, an act with consequences that impact the rest of her life.

Nearly twenty years later, estranged from her mother and working at a Manhattan start-up, Qu requests her OCFS report. When it arrives, key details are wrong. Faced with this false narrative, and on the brink of losing her job as the once-shiny start-up collapses, Qu looks once more at her life's truths, from abandonment to an abusive family to seeking dignity and meaning in work.

Traveling from Wenzhou to Xi'an to New York, Made in China is a fierce memoir unafraid to ask thorny questions about trauma and survival in immigrant families, the meaning of work, and the costs of immigration.

Praise For Made in China: A Memoir of Love and Labor…

"The immigrant child longs to be understood and unload her truths, while simultaneously being tasked with preserving her parents’ humanity . . . The struggle . . . seems to be holding all of these conflicting emotions at once. To shield the parent while escaping her. To forgive abuse without excusing it. To be grateful for their sacrifice and still say, I needed more than you gave me. Qu . . . honor[s] these complexities, tell[s] us we were not meant to swallow our pain and survive in this world without support systems . . . Love, although never overt, is not absent." —Chanel Miller, The New York Times Book Review

"Qu’s debut memoir untangles the knots of her complicated, traumatic past as she learns the truth about her own history and reckons with the hopes and constraints of the immigrant experience." —Time

"The book is a modern, insightful look at the often impossible situations immigrants must often do to survive." —Zibby Owens, Good Morning America

"This candid, heartbreaking story centers on an uncommon immigrant narrative featuring a complicated mother-daughter relationship intermingled with the dark side of the pursuit of opportunity in America." —Oprah Daily

"Qu's indelible account of her lonesome childhood should gain her everything she lacked then—confidants, witnesses and fans—who will cheer when she finally reconnects with a long-lost beloved." —Jenny Shank, Star Tribune

"A skillful and emotive excavation of a traumatic childhood split between China and the United States." —Jonathan Chatwin, South China Morning Post

"There are no easy answers here, and that’s what makes this memoir so absorbing." —Elayna Trucker, Napa Valley Register

"A heartbreaking reflection of the ripple effects of immigration." —Katherine Ouellette, WBUR

"Made in China is a fierce, provocative look at the sacrifices made by immigrants in a new country, and the sacrifices they pass down to the next generation. It's a story of family and trauma, resilience and collapse, and Qu is dazzling as she dismantles the mythologies surrounding the immigrant work ethic, making clear that a person's humanity should never be connected with how 'productive' they are." —Kristin Iversen, Refinery29

"A harrowing memoir about the indifference we show toward children, especially those who emigrate to the United States." —Evette Dionne, Bitch

"A deeply honest rendering of domestic conflict . . . Made in China is dynamic, a subversive and yet inherently personal piece of work . . . In this memoir, Qu doesn’t conform to labels. She rips off the tags others have created for her and creates her own." —Valerie Wu, Asia Pacific Arts

"Anna’s story shares a similar arc to the likes of Educated and The Glass Castle—memoirs with heroines who overcome seemingly insurmountable disadvantages through education and sheer will." —Yoojin Na, BOMB

"Unravels larger assumptions about immigration, labor, and trauma at both the personal and collective level, demonstrating how many seemingly disparate elements of our lives are deeply connected . . . It is a clear-eyed look at a reality that many in the United States would otherwise look away from . . . Remarkable." —Julia Shiota, Ploughshares

"Anna Qu has a tough story to tell, and she tells it with graceful candor . . . Made in China isn’t always an easy read, but it will make you examine the intricacies of mother-daughter love and the indelible influence of intergenerational trauma." —Megan Vered, The Rumpus

"Qu rewrites the bootstrap narrative of immigrants building a better life for their children in her grim and entrancing debut . . . Even in revisiting her harrowing memories, Qu writes from a place of empathy, transcending pain to embrace hope . . .  This marks the arrival of a promising new voice." —Publishers Weekly (starred review)

"Anna masterfully evokes her childhood with a power and grace that speak of an experience that no one should ever have to endure. This moving and unforgettable memoir needs to be read by everyone." —Nicole Dennis-Benn, author of Patsy

Anna Qu is a Chinese American writer. Her work has appeared in The Threepenny Review, Lumina, Kartika Review, Kweli Journal, Vol. 1 Brooklyn, and elsewhere. She holds an MFA from Sarah Lawrence College and lives in Brooklyn. Find out more at annaqu.com.
Loading...
or support indie stores by buying on