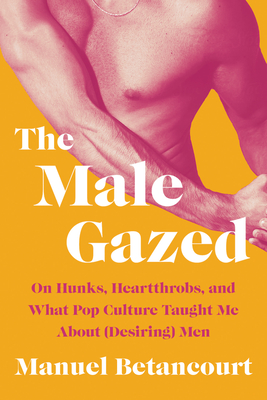 Featuring deep dives into thirst traps, drag queens, Antonio Banderas, and telenovelas—all in the service of helping us reframe how we talk about (desiring) men—this insightful memoir-in-essays is as much a coming of age as a coming out book

Manuel Betancourt has long lustfully coveted masculinity—in part because he so lacked it. As a child in Bogotá, Colombia, he grew up with the social pressure to appear strong, manly, and, ultimately, straight. And yet in the films and television he avidly watched, Betancourt saw glimmers of different possibilities. From the stars of telenovelas and the princes of Disney films to pop sensation Ricky Martin and teen heartthrobs in shows like Saved By the Bell, he continually found himself asking: Do I want him or do I want to be him?

Written in the spirit of Hanif Abdurraqib and Olivia Laing, The Male Gazed mingles personal anecdotes with cultural criticism to offer an exploration of intimacy, homoeroticism, and the danger of internalizing too many toxic ideas about masculinity as a gay man.

Manuel Betancourt is a queer Colombian culture writer and film critic. His work has been featured in The New York Times, BuzzFeed Reader, Los Angeles Times, Film Quarterly, Los Angeles Review of Books and GQ Style, among others. Manuel is the author of Judy Garland's Judy at Carnegie Hall (Bloomsbury Press, 2020), and a contributing writer to the Eisner Award-nominated graphic novel series, The Cardboard Kingdom (Knopf Books for Young Readers, 2018 & 2021).
Loading...
or support indie stores by buying on