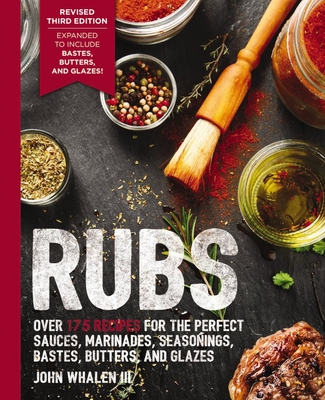 Updated & Revised to Include Over 175 Recipes for Rubs, Marinades, Glazes, and Bastes (Grilling Gift, BBQ Cookbook, Outdoor Cooking, Gifts for Fathers, Entertaining Techniques, Fourth of July) (The Art of Entertaining)

Rubs, 3rd Edtiion has been fully revised, updated, and expanded to feature over 175 recipes for rubs, marinades, glazes, and bastes –season any dish to create your own signature concoction!

With over 175 recipes for rubs, marinades, glazes, and bastes the new and expanded edition of the bestselling Rubs, 3rd Edition makes it even easier to season any dish to create your own signature concoction. Smart design informs readers of flavor profiles – like “spicy,” “sweet,” “savory,” and “tangy – and the types of proteins on which each one works best. Whether you’re cooking beef, seafood, veggies, or tofu, with this flavor-packed handbook at the ready, you won’t believe how good these easy-to-follow recipes make your food taste.

John Whalen III is the author of more than four cookbooks. Born and raised in both the culinary and also publishing industries, he founded Whalen Book Works in 2016 in order to publish a curated list of culinary and nonfiction titles. Prior to founding Whalen Book Works, Whalen started his career as a passionate and adventurous cook when he had the privilege of cooking under acclaimed executive chefs Derek Bissonnette and Jonathan Cartwright of the White Barn Inn in Kennebunkport, Maine. After mastering classic American cooking techniques, Whalen organized culinary tour of China, finding his passion for Sichuan cooking in Chongqing, China. Willing to travel to nearly anywhere in the world for exceptional food, Whalen now splits his time living in New York City and Chongqing.
Loading...
or support indie stores by buying on