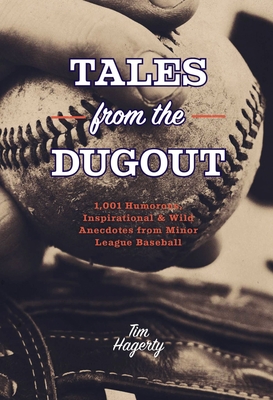 Tales from the Dugout

A wild bull on the field, a fly ball caught by a train conductor, a pitcher taking the mound barefoot—Minor League Baseball has been played across the country in cities large and small for more than a century, and there are thousands of stories to tell from it.

1,001 Minor League Baseball Stories collects the zaniest Minor League stories. Given its long history, it is no surprise that the game has encountered some bizarre things over the years. This humorous and outlandish collection of stories is sourced from newspaper archives and the Baseball Hall of Fame Library in Cooperstown, New York, and includes a foreword by former MLB All-Star Billy Butler. Whether you're a baseball fanatic or just a fan of sports history, this book captures the spirit of the game.

- HOLE IN ONE: In 1942, a Milwaukee Brewers batter hit a low line drive that bounced down the right field line. He rounded the bases while confused Louisville Colonels fielders searched for the ball. They eventually found it inside a gopher hole.
- TOO FAR: The Denison Tigers started the 1896 Texas Association season with a pitcher's mound that was 70 feet from home plate.
- MONKEYING AROUND: A chimp's escape turned a Southern Association game into pandemonium on July 17, 1909. "Henry the Chimpanzee," the New Orleans Pelicans' official mascot, busted from his cage and chased players around the field. The chimp then went after fans, who ran from him screaming. The game was delayed a few minutes while Henry was restrained.
- HEADLESS CRUSHER: A police department in Ohio got a call about a missing head. The Lake Erie Crushers' mascot's head was stolen in 2011, forcing the mascot to miss a few home games. After learning through media reports that police were investigating, the thief returned the head by inconspicuously placing it under the ballpark's tarp.

Tim Hagerty has broadcasted professional baseball games for 18 years. He has written hundreds of freelance national baseball articles for Baseball Digest, MLB.com, Sporting News, The Hardball Times, and other publications.

Tim Hagerty has broadcasted professional baseball games for 18 years. He has written hundreds of freelance national baseball articles for Baseball Digest, MLB.com, Sporting News, The Hardball Times, and other publications.
Loading...
or support indie stores by buying on