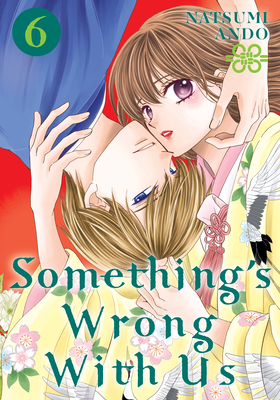 Something's Wrong With Us 6

Nao is more nervous than ever as her body begins to accommodate a new life, so she copes by focusing on her beloved wagashi. She throws herself into making Shimaya’s warabi mochi in order to help Jojima earn back the acclaim for his family’s treasured confection. Meanwhile, Tsubaki senses that Nao is hiding something from him, but decides not to press her about it. When they visit Yuko, Tsubaki lays bare his feelings, and Nao is touched by his sincerity. As the couple grows closer, she thinks she can take a chance on his love, but trouble is never far on the horizon for these two lovers bound by a dark past…

Natsumi Ando won the 19th annual Nakayoshi Rookie Award in 1994 for her debut, Headstrong Cinderella. Her other popular series include Zodiac P.I., Kitchen Princess and Arisa. Her hobbies include reading, watching movies, and eating delicious food.
Loading...
or support indie stores by buying on