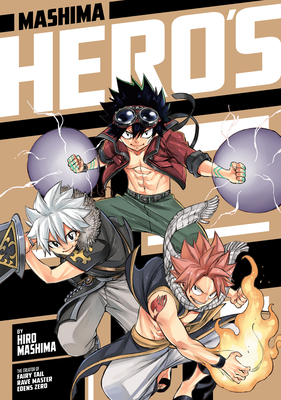 A delightful gift to every Hiro Mashima fan! Discover HERO'S, the ultimate crossover, the new manga that brings together wizards, warriors, and spacefarers from every corner of the Hiro Mashima universe, including characters from FAIRY TAIL, RAVE MASTER, and EDENS ZERO. This is Mashima's victory lap! Don't miss it!

The Fairy Tail guild are enjoying a well-deserved rest on True Island, an island known to contain the truth behind all the secrets of the world, when Natsu gets drawn into the jungle by the smell of delicious fruit. There he encounters Shiki, a young boy who's after the same fruit! Will our heroes become friends or rivals? And how many other classic characters will make an appearance? Find out as all your old faves from three manga classics come together for the first time in a brand-new adventure!

One of the world's bestselling and most prolific comics artists, Hiro Mashima is the creator of the 63-volume magical epic Fairy Tail as well as its prequel Fairy Tail Zero, fantasy series Rave Master, the game spinoff Monster Hunter Orage, and a variety of other manga series and short stories.
Loading...
or support indie stores by buying on