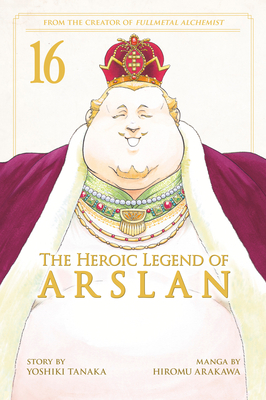 The epic of palace intrigue and battlefield glory, from the creator of Fullmetal Alchemist, that became a hit anime franchise!

THE SCOURGES OF GILAN
King Andragoras arrives at Peshawar, reclaiming his army and  authority from Arslan. To rub more salt in the wound, Andragoras banishes Arslan to the south, declaring he can only return once he’s amassed an army of 50,000 soldiers. Arslan and his crew set out on this seemingly impossible mission, and their ﬁrst destination is the beautiful, bustling port city of Gilan. However, things are not as sunny in Gilan as they appear. Arslan’s group of eight ﬁnds itself in a struggle to defend Gilan…from an army of pirates. And someone lurking in the shadows wants the pirates to win…

Dr. Yoshiki Tanaka is a popular Japanese novelist who is best known for The Heroic Legend of Arslan and Legend of the Galactic Heroes. His works have been known to span across multiple media, including manga, anime, and even musicals.

Hiromu Arakawa is the award-winning artist behind the immesnsely popular Fullmetal Alchemist. In addition to Fullmetal Alchemist, she is also the illustrator/author of Silver Spoons which is currently available as an animated television series in Japan and the United States. Her newest work is as the illustrator of The Heroic Legend of Arslan, a featured title in the same magazine as Attack on Titan.
Loading...
or support indie stores by buying on