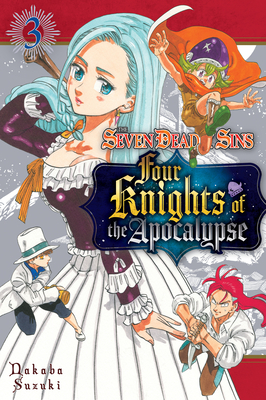 Four Knights of the Apocalypse 3

Return to the magical and thrilling world of Britannia with this new adventure from the creator of The Seven Deadly Sins, the manga that inspired the No. 1 hit Netflix Original Anime!

After defeating the Holy Knight Talisker and joining up with Nasiens the herbalist, Percival and company head to the city of Sistana to arrange transportation to Liones. However, not all is well in the city of Sistana. A Holy Knight is searching for a fragment of the “Coffin of Eternal Darkness,” telling the  townsfolk that it will protect them from the danger of the Four Knights. However, a young lady with a strange power knows he has other intentions. When Percival arrives, he discovers that he has a personal stake in stopping this evil plan. But with such a powerful opponent, he may not survive the attempt…

Nakaba Suzuki is one of only a few manga artists to have work published in all of the "big three" boys' magazines: Shonen Jump, Shonen Sunday, and Shonen Magazine. The Seven Deadly Sins is his first series to be translated into English.
Loading...
or support indie stores by buying on