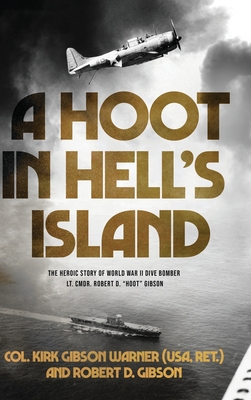 A Hoot in Hell's Island

In the dark days of 1942, the battle for the Solomon Islands was very much in doubt. When carrier dive bomber Robert D. "Hoot" Gibson sighted the Japanese fleet heading for "Hell's Island," he attacked the vanguard ships, sinking the heavy cruiser Kinugasa and two loaded Japanese troop transports in a battle royal that earned him the Navy Cross. He was also credited with the sinking of an I-Class submarine and shooting down two Zeroes, after going toe-to-toe with Japan's premier ace pilot, and he alone accounted for the deaths of thousands of Japanese soldiers and sailors.Hoot was a hero when America needed heroes and when America needed to turn the tide of the war from defense to offense. He was on the Yorktown at Midway and the Enterprise at Guadalcanal. Hoot was in three of the five carrier battles of the war, the first and last amphibious invasions of WWII, and thirteen major battles. A Hoot in Hell's Island tells Hoot's dramatic story and that of the American navy in the crucial battles of the Pacific War.