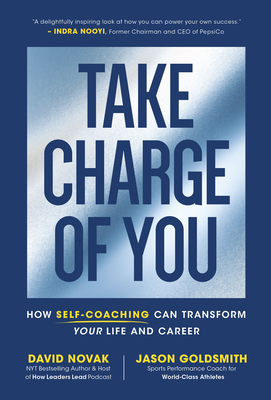 Take Charge of You

How Self-Coaching Can Transform Your Life and Career

Acclaimed YUM Brands CEO and author of The New York Times best-selling leadership book, Taking People With You, David Novak, teams up with Jason Goldsmith, the coach to some of the world's best PGA golf stars, to bring you groundbreaking lessons on personal growth and professional development.

Take Charge of You teaches you the secrets to self-coaching. Everyone could use a good coach to help them reach their full potential. Unfortunately, there just aren't enough good ones to go around, and the ones that exist are often too expensive or sought-after for most of us to even consider hiring them.

Your life is too important to leave your personal growth and professional development up to chance. Take Charge of You helps you define for yourself what you want out of life and give yourself what you need to succeed.

David Novak is the former Chairman and CEO of Yum! Brands, Inc., which operates in more than 120 countries and employs 1.4 million people. All three of the company's restaurant chains--KFC, Pizza Hut, and Taco Bell--are global leaders in fast food. Prior to leading Yum!, he was president of both KFC and Pizza Hut and held senior management positions at PepsiCo. Novak has been recognized as "2012 CEO of the Year" by Chief Executive magazine, one of the world's "30 Best CEOs" by Barron's for the past two years, one of the "Top People in Business" by FORTUNE and one of the "100 Best-Performing CEOs in the World" by Harvard Business Review. Novak is also the author of three acclaimed leadership book, including the New York Times bestseller, Taking People With You. In 2008, he was also awarded the Woodrow Wilson Award for Corporate Citizenship. Jason Goldsmith is a globally recognized Performance Coach who emphasizes combining the mental and physical aspects of optimal performance. As Founder of Goldsmith Performance, Jason has coached multiple Major champions and top 50 golfers. His accomplishments in golf include assisting Jason Day and Justin Rose in achieving the World #1 ranking and helping Rose win both the Gold Medal at the 2016 Olympics and the 2018 FedEx Cup. In recent years, Jason's practice expanded to include the NBA, MLB, NFL, USTA, Olympic athletes and coaches, a significant number of Division I and II colleges, nationally ranked junior athletes and Fortune 500 executives. Jason is also President and Founder of Mustard, a computer vision enabled social platform that is revolutionizing performance coaching by creating proprietary CV/AI technology in partnership with legends Dr. Tom House, Mia Hamm, Drew Brees, Nolan Ryan, Anson Dorrance and several other hall of fame coaches and athletes. He resides in Spokane, Washington.
Loading...
or support indie stores by buying on