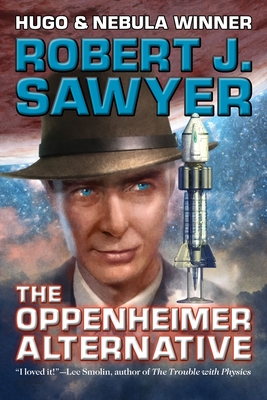 "Really great, a page turner. I was hooked from the beginning to the end."--Andre Bormanis, co-executive producer, The Orville and Cosmos

On the 75th anniversary of the dropping of the atomic bomb, Hugo and Nebula-winning author Robert J. Sawyer takes us back in time to revisit history...with a twist.

While J. Robert Oppenheimer and his Manhattan Project team struggle to develop the A-bomb, Edward Teller wants something even more devastating: a bomb based on nuclear fusion--the mechanism that powers the sun.

Teller's research leads to a terrifying discovery: by the year 2030, the sun will eject its outermost layer, destroying the entire inner solar system--including Earth.

As the war ends with the use of fission bombs against Japan, Oppenheimer's team, plus Albert Einstein and Wernher von Braun, stay together--the greatest scientific geniuses from the last century racing against time to save our future.

Meticulously researched and replete with real-life characters and events, The Oppenheimer Alternative is a breathtaking adventure through both real and alternate history.

Robert J. Sawyer is one of only eight writers in history to have won all three of the science-fiction field's top awards for best novel of the year: the Hugo (which he won for Hominids), the Nebula (which he won for The Terminal Experiment), and the John W. Campbell Memorial Award (which he won for Mindscan). Sawyer's novel FlashForward was the basis for the ABC TV series of the same name, and he wrote the two-part finale for the acclaimed web series Star Trek Continues. The New York Times calls Sawyer "a writer of boundless confidence and bold scientific extrapolation." New Scientist calls his work "scientifically plausible, fictionally intriguing, and ethically important." And The Washington Post says, "No reader seeking well-written stories that respect, emphasize, and depend on modern science should be disappointed by the works of Rob Sawyer."
Loading...
or support indie stores by buying on