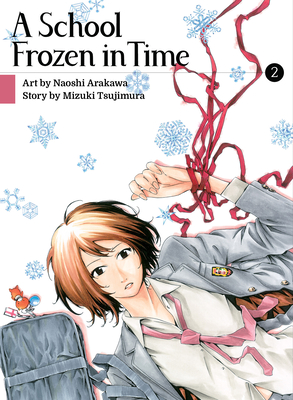 A School Frozen in Time, volume 2

From two star creators Naoshi Arakawa (Your Lie in April) and award winning writer Mizuki Tsujimura (Anime Supremacy!) comes a psychological horror story filled with twists, turns, and hard truths about the lives of high school students and the pressures they face in modern society.

A regular school day has turned into a chilling horror as Hiroshi, Mizuki, and their friends find themselves confined within the frigid walls of Seinan Gakuin. No one can seem to remember who took their own life at the school festival, but whoever it was is keeping them captive. And to make matters worse, the eight trapped classmates become seven when Mitsuru suddenly disappears with only a trail of blood in his place. Now they have even more reason to solve the mystery of their bizarre circumstances—because if they don’t, the only thing they may be leaving is this mortal coil…

Mizuki Tsujimura made her debut by winning the Mephisto Prize, in 2004, Best known as an author of dark mysteries, she won the Naoki in 2012. A Japan Booksellers' Award nominee, Anime Supremacy! was her first work to be published in English.

Naoshi Arakawa made his debut as a manga artist in 2007 with Tsumetai Kousha no Toki wa Tomaru (A School Frozen in Time), a manga adaptation of the award-winning mystery novel by Mizuki Tsujimura. He made his U.S. debut in 2015 with Your Lie in April, which along with its anime adaptation in 2015, became a hit with American audiences. His most recent series is Farewell, My Dear Cramer, which is currently available as a simulpub series and is the sequel to his Sayonara, Football manga about girls' soccer.
Loading...
or support indie stores by buying on