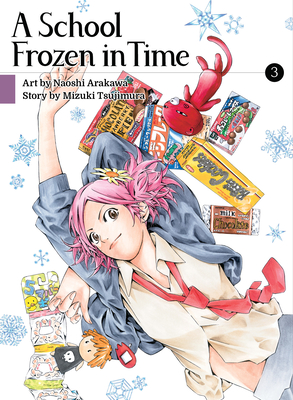 A School Frozen in Time, Volume 3

First, there were eight, and now there are six. With Mitsuru and Shimizu now missing, everyone is on edge as they try to find a way out of their horrifying circumstances. The remaining students continue to suspect that the person keeping them trapped is among them, but Shimizu also suggested a bizarre, new theory: they may be inside the mind of the person who took their own life at the school festival. Takano thinks he might just know who their tormentor is, but many unanswered questions still remain. Can he get to the bottom of this mystery before his time's up?

Mizuki Tsujimura made her debut by winning the Mephisto Prize, in 2004, Best known as an author of dark mysteries, she won the Naoki in 2012. A Japan Booksellers' Award nominee, Anime Supremacy! was her first work to be published in English. Naoshi Arakawa made his debut as a manga artist in 2007 with Tsumetai Kousha no Toki wa Tomaru (A School Frozen in Time), a manga adaptation of the award-winning mystery novel by Mizuki Tsujimura. He made his U.S. debut in 2015 with Your Lie in April, which along with its anime adaptation in 2015, became a hit with American audiences. His most recent series is Farewell, My Dear Cramer, which is currently available as a simulpub series and is the sequel to his Sayonara, Football manga about girls' soccer.
Loading...
or support indie stores by buying on