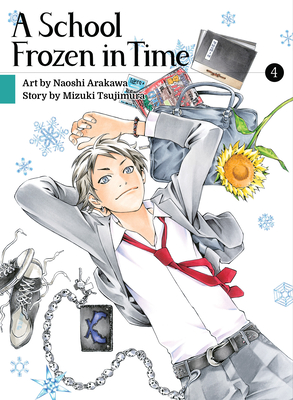 A School Frozen in Time, Volume 4

From two star creators Naoshi Arakawa (Your Lie in April) and award winning writer Mizuki Tsujimura (Anime Supremacy ) comes a psychological horror story filled with twists, turns, and hard truths about the lives of high school students and the pressures they face in modern society. Tick. Tock. As the clock starts again, Takano and his remaining classmates must face their fears and traumas, still trapped within the frigid walls of their school. Takano finds himself back at the origin point of this icy nightmare: the last day of the school festival. There, he finally remembers who it was that took their own life, and the surprising identity of that person begins to uncover the mysteries that have plagued Takano and his friends. But answering the question that's hung dangerously over their heads will reveal one last puzzle to solve--and if they don't act fast, they just might lose another precious friend... Final Volume.

Mizuki Tsujimura made her debut by winning the Mephisto Prize, in 2004, Best known as an author of dark mysteries, she won the Naoki in 2012. A Japan Booksellers' Award nominee, Anime Supremacy! was her first work to be published in English. Naoshi Arakawa made his debut as a manga artist in 2007 with Tsumetai Kousha no Toki wa Tomaru (A School Frozen in Time), a manga adaptation of the award-winning mystery novel by Mizuki Tsujimura. He made his U.S. debut in 2015 with Your Lie in April, which along with its anime adaptation in 2015, became a hit with American audiences. His most recent series is Farewell, My Dear Cramer, which is currently available as a simulpub series and is the sequel to his Sayonara, Football manga about girls' soccer.
Loading...
or support indie stores by buying on