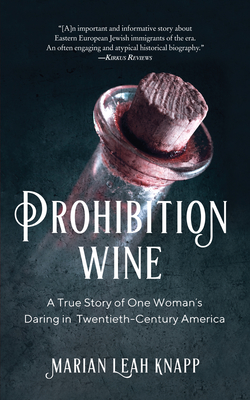 A True Story of One Woman's Daring in Twentieth-Century America

In 1918, Rebecca Goldberg--a Jewish immigrant from the Russian Empire living in rural Wilmington, Massachusetts--lost her husband, Nathan, to a railroad accident, a tragedy that left her alone with six children to raise. To support the family after Nathan's death, Rebecca continued work she'd done for years: keeping chickens. Once or twice a week, with a suitcase full of fresh eggs in one hand and a child in the other, she delivered her product to relatives and friends in and around Boston.
Then, in 1920--right at the start of Prohibition--one of Rebecca's customers suggested that she start selling alcoholic beverages in addition to her eggs to add to her meagre income. He would provide his homemade raw alcohol; Rebecca would turn it into something drinkable and sell it to new customers in Wilmington. Desperate to feed her family and keep them together, and determined to make sure her kids would all graduate from high school, Rebecca agreed--making herself a wary participant in the illegal alcohol trade.
Rebecca's business grew slowly and surreptitiously until 1925, when she was caught and summoned to appear before a judge. Fortunately for her, the chief of police was one of her customers, and when he spoke highly of her character before the court, all charges were dropped. Her case made headline news--and she made history.