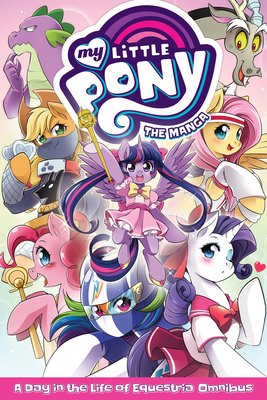 The Manga - A Day in the Life of Equestria Omnibus

The 3-volume manga series set in the world of Hasbro's My Little Pony: Friendship is Magic, contained entirely in one omnibus!

The world of My Little Pony comes alive in this distinctive manga series that spotlights each of the Mane 6 and a host of other characters from the land of Equestria! When Pinkie Pie lends a hoof to help Twilight Sparkle and Spike clean up the castle Library, she discovers a mysterious mirror with the power to gaze into alternate realities. Upon entering the portal-like mirror, Pinkie Pie sets off a chain of events that could spell doom for Equestria! Follow this adventure-and many more-in this hilarious manga for fans of all ages. Originally released as three volumes, get the entire set in this special omnibus edition!

David Lumsdon lives in Ottawa and has been an avid comics reader (of all kinds) since a very young age. He has written and collaborated on many of Pixie Trix Comix most iconic series including Ma3, Eerie Cuties, Magick Chicks, Dangerously Chloe, and Sandra on the Rocks.

Shiei is a New York Times bestselling manga artist that has drawn over twenty volumes of manga including Amazing Agent Luna, Aoi House, Vampire Cheerleaders, and Avalon: The Warlock Diaries. She has also provided manga artwork for The Illustrated Fairy Tale Princess Collection and an illustrated edition of Pride & Prejudice. She currently lives in southern California and adores all things My Little Pony. (Fluttershy is her favorite.)
Loading...
or support indie stores by buying on