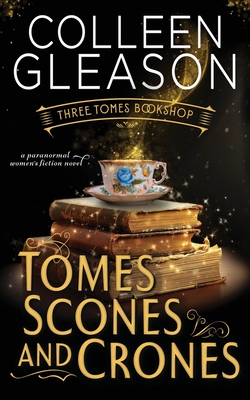 At forty-eight, Jacqueline Finch has a nice, easy life with few responsibilities: she's been a librarian in Chicago for twenty-five years, she doesn't have a husband, children, or pets, and she's just coasting along, enjoying her books and a small flower garden now that she's over the hill.

That is, until the Universe (helped by three old crones) has other ideas.

All at once, Jacqueline's staid (and boring) life is upended, and the next thing she knows, she's heading off to Button Cove to start a new life as the owner of Three Tomes Bookshop.

The bookstore is a darling place, and Jacqueline is almost ready to be excited about this new opportunity...until Mrs. Hudson and Mrs. Danvers show up. Somehow, the literary characters of Sherlock Holmes's landlady and Rebecca deWinter's creepy and sardonic housekeeper are living persons who work at the bookshop (when they aren't bickering with each other). Not only does Jacqueline have to contend with them-and the idea that people regularly eat pastries while reading books in her store -but the morning after she arrives, the body of a dead man is found on her property.

Things start to get even more strange after that: Jacqueline is befriended by three old women who bear a startling resemblance to the Witches Three from Macbeth, an actual witch shows up at her bookshop and accuses Jacqueline of killing her brother, and the two women who own businesses across the street seem determined to befriend Jacqueline.

And then there's the police detective with the very definite hot-Viking vibe who shows up to investigate the dead body...

The next thing Jacqueline knows, her staid and simple life is no longer quiet and unassuming, and she's got crones, curses, and crocodiles to deal with.

And when a new literary character appears on the scene...things start to get even more hairy and Jacqueline is suddenly faced with a horrible life and death situation that will totally push her out of her comfort zone...if she's brave enough to let it.

After all, isn't forty-eight too late for an old dog to learn new tricks?

From the bestselling author of the Wicks Hollow series, Tomes, Scones & Crones is the first book in a new paranormal women's fiction series about coming into one's own when you're over the hill, and owning one's "croneness."