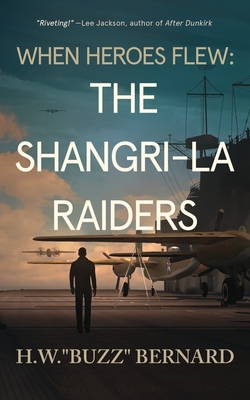 Inspired by the true story of Colonel Jimmy Doolittle's raid on Japan in 1942, The Shangri-La Raiders is the next stunning installment of the When Heroes Flew WWII historical fiction series.

"Well-researched and well-told." -Mark Sullivan, USA Today bestselling author of The Last Green Valley and Beneath a Scarlet Sky

This gripping novel follows an American bomber crew through their secretive training, a harrowing raid on Japan, and on their desperate journey through occupied China to Chungking, the seat of the country's wartime government.

The crew, along with an American missionaries' daughter whom they've rescued, must evade the Japanese occupiers every step of the way. And amidst all the horror and turmoil of war, a romance blossoms between the rescued woman and the crew's pilot.

When Heroes Flew: The Shangri-La Raiders is a captivating tale of bravery, determination and an unlikely love that will leave you hooked until the very end.

Praise for The Shangri-La Raiders:

"Riveting This fact-based story will place you in the cockpit of a B-25 bomber on one of the most celebrated raids of World War II, living facets of it that are so little known." -Lee Jackson, author of After Dunkirk

"Another clever mixture of fact and fiction...Bernard's flair for bringing history alive is on full display." -Steve Berry, NYT bestselling author of The Kaiser's Web