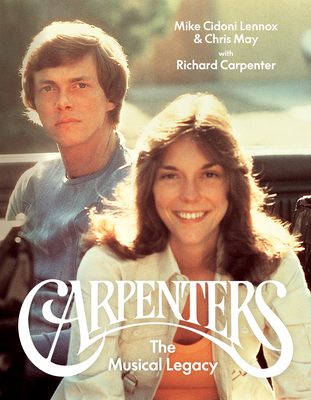 The definitive biography of one of the most enduring and endeared recording artists in history—the Carpenters—is told for the first time from the perspective of Richard Carpenter, through more than 100 hours of exclusive interviews and some 200 photographs from Richard's personal archive, many never published.

After becoming multimillion-selling, Grammy-winning superstars with their 1970 breakthrough hit "(They Long to Be) Close to You," Richard and Karen Carpenter would win over millions of fans worldwide with a record-breaking string of hits including "We've Only Just Begun," "Top of the World," and "Yesterday Once More."

By 1975, success was taking its toll. Years of jam-packed work schedules, including hundreds of concert engagements, proved to be just too much for the Carpenters to keep the hits coming—and, ultimately, to keep the music playing at all. However, Richard and Karen never took their adoring public, or each other, for granted.

In Carpenters: The Musical Legacy, Richard Carpenter tells his story for the first time. With candor, heart, and humor, he sheds new light on the Carpenters' trials and triumphs—work that remains the gold standard for melodic pop. This beautifully illustrated definitive biography, with exclusive interviews and never-before-seen photographs, is a must-have for any Carpenters fan.

Praise For Carpenters: The Musical Legacy…

"...a book based on hundreds of hours of interviews Richard gave to authors Mike Cidoni Lennox and Chris May. Crammed with photos, posters, programs, reviews and work schedules, it is intended as the definitive story of the 1970s recording stars."
— Reuters,


"It has the heft and visual history of a coffee table book, but it’s also a nearly note-for-note musical biography of the pair that goes back to their childhood lives in New Haven, Connecticut, where Richard Carpenter found the seeds of the group’s sound in his father’s records and a toy jukebox."
— Associated Press ,


"Fans who know their songs by heart will welcome “Carpenters: The Musical Legacy."...Pictured throughout the book are treasures from Mr. Carpenter’s collection....The most touching photographs are those of his sister, candid shots that show her deep in concentration or smiling radiantly."
— The Wall Street Journal,


"Coffee table sized, close to 400 pages, littered with previously unseen photographs (the majority in color), ephemera, it’s a design super-show....Like their music, it’s a book for marveling at, photo after photo after photo, everything from the most casual backstage or studio setting to album cover out-takes, foreign 45 sleeves, TV appearances, the lot."
- Goldmine,

Chris May is a longtime Carpenters expert and historian, a sixteen-year moderator and contributor for the popular online Carpenters discussion forum at A&M Corner, and a consultant, freelance music director, and arranger. He lives near Palm Springs, California, with his wife.

Mike Cidoni Lennox has been a nationally syndicated journalist for nearly 40 years and currently serves as a senior entertainment reporter for the Associated Press. He lives in suburban Los Angeles with his husband.
Loading...
or support indie stores by buying on