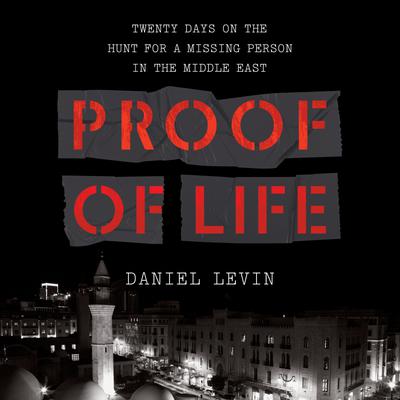 By Daniel Levin, Will Collyer (Narrator)

​“Truly thrilling. Daniel Levin brilliantly conveys both the menace and the evil of Middle Eastern intrigue, and some victories of human kindness over cruelty and despair.”
—Daniel Kahneman, New York Times bestselling author of Thinking, Fast and Slow

“In laying bare the raw human toll of the ferocious and cruel Syrian conflict, Proof of Life asks the reader to make a choice between cynicism and compassion.”
—Ayaan Hirsi Ali, New York Times bestselling author of Infidel

Daniel Levin was at his office when he got a call from an acquaintance with an urgent, cryptic request to meet in Paris. A young man had gone missing in Syria. No government, embassy, or intelligence agency would help. Could he? Would he? So begins a suspenseful, shocking, and at times brutal true story of one man’s search to find a missing person in Syria over twenty tense days. Levin, a lawyer turned armed-conflict negotiator, uses his extensive contacts to chase leads throughout the Middle East, meeting with powerful sheikhs, drug lords, and sex traffickers in his pursuit of the truth. He also discovers remarkable people who retain their essential goodness and spirit in the face of adversity.

In Proof of Life, Levin dives deep into a shadowy world where few have access—an underground industry of war where everything is for sale, including arms, drugs, and even people. He offers a fascinating study of how people use leverage to get what they want from one another and where no one does a favor without wanting something in return, whether it’s immediately or years down the road.

Proof of Life is a fast-paced thriller wrapped in a memoir, a must-read for anyone interested in power dynamics, international affairs, the Middle East, or our growing number of forever wars.

The son of a diplomat, Daniel Levin spent his early years in the Middle East and in Africa and then trained as a lawyer. Currently a board member of the Liechtenstein Foundation for State Governance, he has, for the past twenty years, worked with governments and development institutions worldwide, focusing on economic development and political reform through financial literacy, political inclusion, and constitutional initiatives. He is also engaged in track 3 diplomacy and mediation efforts in war zones. Levin’s first book, Nothing but a Circus: Misadventures among the Powerful, was published in Germany, Japan, Russia, and the UK. Proof of Life is his first book to be published in the United States. He lives outside New York City.